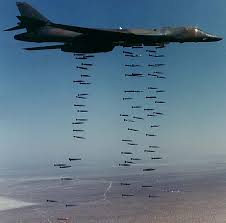 
RT @CharlesSDPB: "Ellsworth Officials: on average it costs over $14,000 per hour in fuel alone to fly a B1 Bomber. In total a B1 costs an average of over $43,000 dollars/hour to fly. But some worry cutbacks come as N. Korea heats up."

As Sen. don Juan Thune's door revolves onto K Street, his lack of leadership has put a proposed expansion of bombing practice on hold.

Recall this from Tom Lutey's piece in the Billings Gazette:


Ellsworth Air Force Base officials say plans for a South Carolina-sized training area over portions of four western states are moving ahead. A key piece of the approval process, a final environmental impact statement, has not been finalized. Spokesman Maj. Matthew Reese said the EIS is out of Ellsworth’s hands. The base has moved on to arranging meetings with state and tribal governments in Montana, Wyoming, North Dakota and South Dakota.

There were numerous concerns when the Air Force held public hearings about the 27,500-square-mile Powder River Training Complex in 2009. Two years ago, U.S. Sens. Max Baucus and Jon Tester, D-Mont., asked the Air Force not to expand the PRTC into southeastern Montana.

Several years ago a B-1 crashed in Carter County: a responding volunteer firefighter from Alzada told this interested party the multi-million dollar aircraft was brought down by a rancher with a .30-30 Winchester.

One encouraging result of Thune's lack of gravitas is that endangered sage grouse may be getting a break from extirpation. Ellsworth Air Force Base B-1 bomber training missions over the sage steppe are being suspended for awhile because Gaia is getting tired of white people in South Dakota killing children in Pakistan, Yemen and elsewhere.

There is a movement in DC aimed at convening the Base Realignment and Closure Commission (BRAC) so the move to ground the EAFB aircraft should come as little surprise to Rep. Krusti Noem (earth hater-SD).

With voices of the cut, cut, cut from her ALEC/Tea Party handlers in one ear while the armed services industry in her other ear telling her that they are worried about losing their cushy relationships with Ellsworth Air Force Base, Noem mused in committee:


the least disruption to national readiness was to "first focus on support systems such as military schools . . . rather than going after -- seeking to close bases that house bombers or fighter wings."

From a piece by Shaun Waterman at the Washington Times:


Just over one third of U.S. military personnel say they support the Republican Party, down from nearly a half in 2006, according to the latest annual Military Times poll. “It may have to do with the rise of the tea party movement,” said a Marine lieutenant colonel who described himself as conservative and told Military Times that he feels “less connected” with today’s GOP. The survey was conducted between Jan. 28 and March 4. A total of 2,121 active-duty service members responded to a questionnaire sent by Military Times. Because the sample is self-selecting, there is no margin of error.

Pork: the other white meat.

After Rapid City said: fuck you, Mr. President, but thanks for the dough; it looks like the worm has turned.
Posted by larry kurtz at 6:14:00 AM