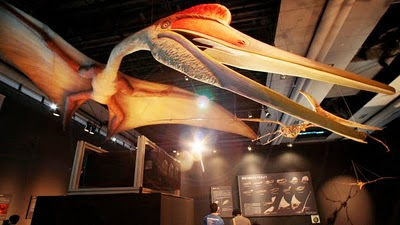 A number of years ago, an article in Archaeology got me to thinking about mythological creatures like griffins. The earliest humans must have certainly been confounded upon stumbling across fossil finds likely influencing creation myths in nearly every culture:


Greek writers began describing the griffin around 675 B.C., at the same time the Greeks first made contact with Scythian nomads. Griffins were described as guarding the gold deposits in the arid hills and red sandstone formations of the wilderness. The region of Mongolia and China where many Protoceratops fossils are found is rich in gold runoff from the neighboring mountains, lending some credence to the theory that these fossils were the basis of griffin myths.

Dragons have existed in literary mythology at least since Beowulf. A Texas fossil unearthed in 1971 and reported in a story on NPR before they archived on the Web, had me thinking about the dragon myth. Now scientists have constructed a reproduction of a creature named Quetzalcoatlus. NPR reports:


The natural world's long-distance flight champions are seagoing birds that fly up to 6,000 miles nonstop. But now, two scientists are proposing to give the honor to the pterosaur, a massive creature from the distant past.

Above the dinosaur exhibit at Pittsburgh's Carnegie Museum of Natural History, a giant pterosaur skeleton hangs from the ceiling. This is a Quetzalcoatlus, thought to be the largest flying animal that ever lived. It has a massive skull with a beak-like mouth, and its wingspan takes up almost the entire ceiling.

"It would have been a very bizarre animal to see fly above you or walk around on the ground," says Mike Habib, a specialist in biomechanics from Chatham University. "It would look like a strange amalgamation of a classic modern reptile, bird, giraffe and bat all squeezed into one."

What other fossils will be found that say, "We are stardust, we are golden, and we've got to get ourselves back to the Garden?"


Writer and scholar Reza Aslan was 15 years old when he found Jesus. His secular Muslim family had fled to the U.S. from Iran, and Aslan's conversion was, in a sense, an adolescent's attempt to fit into American life and culture. "My parents were certainly surprised," Aslan tells Fresh Air's Terry Gross.

Email ThisBlogThis!Share to TwitterShare to FacebookShare to Pinterest
piled in Earth, public radio

For anyone who hasn’t heard, an outfit called Rockology is proposing to strip mine La Bajada mesa and has filed the appropriate applications with the county. A local group based out of Cerrillos (the Rural Conservation Alliance) has been fighting against this application. One of the avenues RCA is pursuing to prevent the strip mine is to secure National Monument status for La Bajada, which would protect it from this kind of destruction. There will be a presentation on the push for National Monument status at 10AM on Wednesday, July 24 at the Cerrillos Hills State Park Visitor Center.

The potential destruction of one of our most beautiful natural features should be of concern to us all. I urge you to get informed about the situation and to get involved in any way you can. To learn more please visit http://savelabajadamesa.blogspot.com/, come to the presentation or reach out to Ross Lockridge, who is spearheading the effort for RCA.

The proposed boundary line for La Bajada Mesa National Monument runs from La Bajada Mesa south to the Cerrillos Hills State Park, north to the Santa Fe River Basin, and across the Caja del Rio Plateau to the Rio Grande River. A National Monument would protect and preserve the Mesa's geologic integrity, cultural, historical and environmental benefits for the public welfare into perpetuity.

Did you honestly believe Brian Schweitzer was going to run?

The Army Corps of Engineers fee for surplus water within the Missouri River system is in the news. Recall that North Dakota's Lake Sakakawea will be first to be drawn down.

Rep. Kristi Noem (earth hater-SD) added an amendment as part of the Energy and Water Development appropriations bill preventing the corps from using any money in the bill to issue rules or regulations related to charging a fee for surplus water.

The state does not own this water it merely warehouses it at federal expense. The Lewis and Clark allotment (long overdue in fruition) also part of this bill cut water allocations promised to downstream states whose rights predate South Dakota’s.

So who is responsible for millions of cubic yards of sediment in the main stem dams? If the dams were dredged there wouldn’t be enough water in the system to generate the power now happening: why would Rep. Noem want to deny the Corps that revenue? South Dakota receives zero dollars for hydropower generation but eminent domain forces transmission lines to be built: how is that in the state’s best interest?

Silt deposits are the responsibility of the state. AG Jackley should sue the mining and ag industries for that runoff. The state took a severance fee: why should it be held harmless? How is this different from taking a tobacco settlement after having levied taxes on said product?

South Dakota doesn’t own the 2.5 trillion dollars stored within its borders for Citibank and Wells Fargo so why isn't it being charged for that surplus? Because Bill Janklow created that by sheer force of will. Remember ETSI? Since when is interstate commerce controlled by the states?

That would be in the butt, bob.

Mrs. Noem has sold out her own children's clean water future as an ag producer having decimated groundwater supplies and is now using the Environmental Protection Agency clean water rules while those in her party rail against the EPA. It's pork: Noem's amendment shifts $25M to a rural water program from spending $15 million for efficiency, renewables, and reliability.

Facts are still being manufactured as officials gauge the damage from an apparent public self-inflicted gunshot to the right temple of Lawrence County's likely most well-armed citizen, Wayne Mayer of Lead:


Facts were still being determined late Friday as the Lawrence County Sheriff’s Office and the South Dakota Department of Criminal Investigation continued sifting through evidence and interviews with Lead Police officers and dozens of spectators who witnessed the suicide. Gold Camp Jubilee continues today with a 9 a.m. Mile High Show & Shine in the Homestake Visitor Center parking lot and entertainment from noon to 4 p.m. with Les Roselles & The Straight Shooters. [Tom Griffith, Rapid City Journal]

Wayne hung out at the Pizza Lab in Central City itself a hang out for law enforcement and when a well-known Democrat went in there to eat Mayer would begin telling anyone listening that a black President is driving the United States down the road to ruin. The locals knew that when the shit hit the fan they could just go to Ghost Town Storage and Wayne would hand out guns.

My guess is that Wayne was on a watch list that leads straight to Attorney General Marty Jackley to whom the Second Amendment is subject to the body of law now wondering why a well known nutcase had an armory.

The study in contrasts took the rig into Lawrence County where the pine beetle continues to reverse a century of human stupidity through a favorite mushroom picking spot off US 385 that was clear cut of pine instead of leaving legacy trees with no apparent intent to prescribe a followup burn to a once-coveted part of the northern Hills most of which is covered with faders and standing dead ponderosa pine. 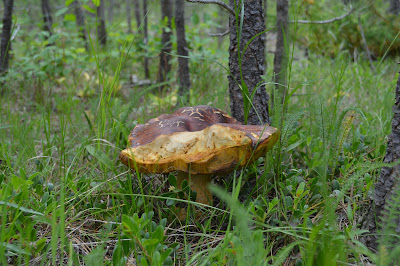 intended quarry but way overripe, the reason for a drive way into the upper Black Hills Limestone, was one Boletus edulis half-eaten by rabbits and deer revealing that fruiting was over. 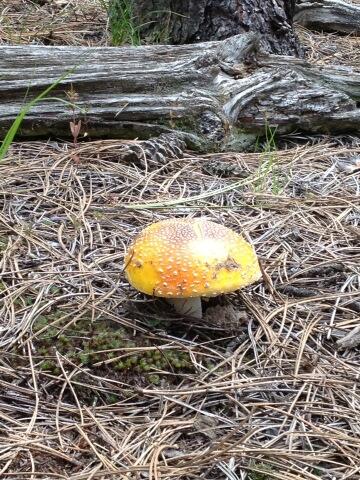 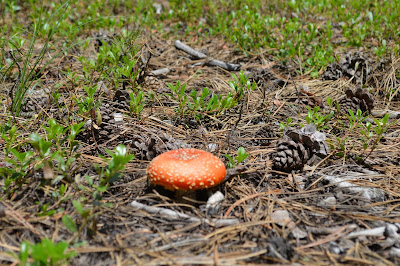 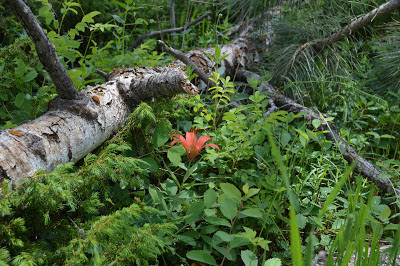 ip is not a New World Order guy, does not support the North American Union (god bless you. please, mr. roddenberry) and believes that the US Constitution is a big enough canvas in order to paint a more perfect masterpiece, a big enough score for all to sing. No violence. No more drug wars.