Speaker of the New Mexico House Brian Egolf not only supports legalization for all adults he serves as legal counsel for the state's therapeutic cannabis leader, Ultra Health. Calling itself "New Mexico's No. 1 cannabis company" Big Dope Ultra just opened facilities in Clayton near the borders with Texas and Oklahoma. Keeping the industry from the clutches of a monopoly has been contentious.

Lawmakers in New Mexico's Democrat-dominated legislature rejected a Republican plan that would have established state-run cannabis retail operations but did decriminalize possession of up to one half ounce. The state's therapeutic cannabis program is nearing 74,000 patients.

In February two University of New Mexico researchers published a study on how cannabis helps treat certain medical conditions. Their results showed that smoking the herb is most effective method for people who ingest cannabis.

A failure to reach a consensus on legal cannabis in New Mexico last session was due in part to home growing. If people want to grow commercially that’s where the state is paid to conduct inspections for purity and standards through a tax on sales. Let growers have retail outlets.

That big medical cannabis law that goes into effect today? It replaced the words "resident of New Mexico" with "person" in the definition for "qualified patient." #nmpol https://t.co/vJIxi4B0Yy

CWD outbreak linked to the extermination of apex predators, overuse of weed killers 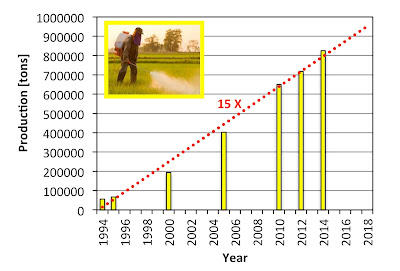 Figure 2. Glyphosate usage over the last two decades. It has been estimated that the production of glyphosate is increasing with a rate of about 40 tons per year. Adapted from Benbrook (13).

Way back when, Bob Newland posted my inaugural blogospheric essay at The Decorum Forum. In the comments, I added:


Evidence exists that sudden aspen death is attributable to non-point sources of pollution, ie. POEA, polyethyoxilated tallowamine, a surfactant present in Monsanto's Roundup®, is a prime suspect. POEA interferes with mycorrhiza and their ability to metabolize water. Malathion®, a widely used insecticide and legion for its toxicity, also contains a surfactant.

I have been covering effects of the surfactant POEA for nearly three decades. Today, wapiti (elk) in the Mountain West are dying en masse from Chronic Wasting Disease (CWD) that some researchers say results from the federal government feeding those cervids in close proximity. Hay fed to those animals is likely contaminated with Roundup®.


Heather Swanson and Ryan Prioreschi monitor wildlife with the City of Boulder. The mountain lions know that something is wrong. A number of years ago, Swanson and her colleagues studied which deer mountain lions prefer to attack. "The mountain lions were definitely preferentially selecting deer that had chronic wasting disease over those that were negative," she says. "And for most of the ones that they had killed, we had not detected any chronic wasting disease symptoms yet. So certainly the lions were able to key in on far more subtle cues than we were." Unlike us, the lions know that while a deer might look sleek and alert, it's actually a ticking time bomb. That's one of the weird things about this disease. It isn't like the usual viral or bacterial illness. The infection can sit in a herd, crawling from animal to animal, for years before people notice anything is wrong. "Through time (it) degrades, essentially, their brain tissue," says Swanson. [Bent Out Of Shape: Could A Mysterious Animal Epidemic Become The Next Mad Cow?]

Environmental pollutants in the umbilical cord blood of infants? How conservative.


In a new research published in the high ranked scientific journal Toxicology, Robin Mesnage, Benoît Bernay and Professor Gilles-Eric Séralini, from the University of Caen, France, have proven (from a study of nine Roundup-like herbicides) that the most toxic compound is not glyphosate, which is the substance the most assessed by regulatory authorities, but a compound that is not always listed on the label, called POE-15. Adjuvants of the POE-15 family (polyethoxylated tallowamine) have now been revealed as actively toxic to human cells, and must be regulated as such.

Studies have shown POEA can break down tissue that protects the blood-brain barrier leading to prion disease.


U.S. Geological Survey (USGS) scientists developing methods to measure POEA in the environment have shown that it’s a complex and variable mixture of related compounds, and that POEA is still a common additive in several newer agricultural and household glyphosate formulations. [Measuring POEA, a Surfactant Mixture in Herbicide Formulations]

Kill off apex predators like wolves and cougars; spray glyphosate and POEA on everything then wonder why cervids contract a prion disease like CWD.

Genesee & Wyoming, the parent company of the Rapid City, Pierre and Eastern Railroad, conducts the business on the west end of the state-owned track and operates on the right of way that intersects the proposed Keystone XL pipeline at Philip. Had the Quinn Dam just upstream of a RCPE washout failed one of its first casualties could have been the Keystone XL pipeline where it's proposed to cross the Bad River. The same geology that thwarts railroads and forces engineers to rebuild I-90 between Reliance and Rapid City and I-94 between Mandan, North Dakota and Billings, Montana every year also makes construction of the Keystone XL pipeline untenable.