Marty Jackley didn't show and postponed Eric Hagen's trial apparently because Jeff Sessions is preparing to strike down the Department of Justice ruling on tribal cannabis to fuck local control.

Attorneys General in both Montana and South Dakota are wailing about the rise of meth use and crying for additional law enforcement industry resources while the Trump administration weighs cracking down on the rights of states to tax cannabis.

Thanks to meth South Dakota's law enforcement industry enjoyed a 22 percent increase in drug arrests last year, the Republicans are out of cash to house inmates and civil forfeiture just isn't paying the bills.


Quinnipiac University released a poll showing that 59 percent of Americans support recreational marijuana legalization and 71 percent of Americans want the federal government to get out of the way of states when it comes to marijuana policy. And you can bet a lot of that support comes from states President Trump won in 2016. The president may not believe that you can ‘Make America Great Again’ by legalizing marijuana, but if he wants states and citizens to be more in control of public policy, he should consider himself the last person who should try to get in the way. [John Hudak]

A just-released British study links high doses of sugar with increased rates of Alzheimer's even as the City of Santa Fe debates a soda tax.

Black market cannabis not tested or subject to regulation makes America less safe. Legalizing and regulating a product that so many people enjoy is reasonable public policy that would align with our life/safety concerns.


So, legalization initiatives have a clear Democratic benefit. Democratic-leaning voters, who otherwise might have stayed home, could turn out to vote on marijuana reform. Some may leave other parts of the ballot blank, but Democrats could see a meaningful benefit overall. In a race that is close, a few thousand votes here or there could force an incumbent Republican Senator to pack up his office or shift a state’s electoral votes from red to blue. [Brookings Institution]

South Dakota has the most draconian cannabis laws in the US: the law enforcement industry can even force catheters into urethras and penises to test possession by ingestion.

Reports from Mexico say homicides are soaring after the the arrest of Joaquín "El Chapo" Guzmán left a power vacuum in illegal drug trade.

For the record, I do not support widespread growing of industrial cannabis in South Dakota, especially on tribal lands: it is an invasive species capable of overgrowing native grasses and easily migrates into adjacent lands. Why anyone would want to buy genetically engineered seed from Monsanto or some other earth hater every year remains a mystery.

Indian casinos are small banks. Let’s ensure that cannabis cultivation and distribution stay out of the hands of Big Dope. It’s time to enter compacts with the tribes, let them distribute on the rez, on off-reservation properties and in Deadwood. 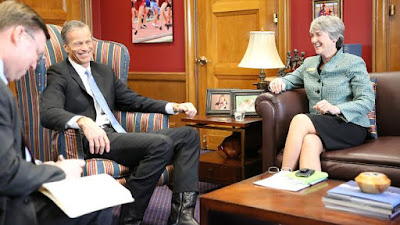 "Dilution is the solution to pollution."

interested party has learned soils contaminated by decades of toxic spills and other hazardous materials at some of America's military bases are being diluted and sprayed from aircraft during exercises over four northern states.

Ellsworth Air Force Base near Rapid City, South Dakota is home to a Superfund site so are Malmstrom AFB, Montana; Minot Air Force Base, North Dakota and FE Warren Air Force Base, Wyoming. These installations are participants at the Powder River Training Complex. Chemtrails have been observed by the public and by general aviation pilots in the expanded practice bombing range.

Spurred by President Heather Wilson of the South Dakota School of Mines and nominee for secretary in Donald Trump's Department of the Air Force, a Rapid City firm specializing in toxic waste has been floating the idea of a deep borehole where contaminated materials could be dumped. Wilson is a Republican former New Mexico politician, Air Force officer and lobbyist linked to double dealing at laboratories with ties to the military/industrial complex.

A deep borehole at the edge of the Ogallala Aquifer in southeastern New Mexico is also being explored. Kirtland AFB outside of Albuquerque and Cannon AFB near Clovis are also remediating contaminated soils. Tinker Air Force Base, Oklahoma is also home to a Superfund site. Ellsworth's B-1B fleet flies there to load.

Billboards along I-25 in New Mexico warn drivers of so-called chemtrail activity.

RESPEC would have far more credibility if it promoted the geothermal aspects of the deep borehole experiments.

Combat Raider is the next dump and is scheduled for March 14-16. 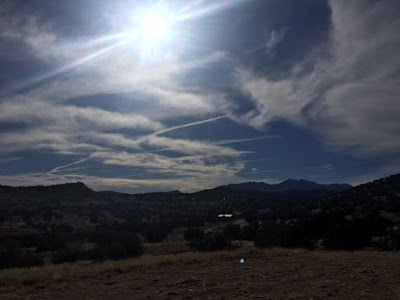 This image shows a typical day over central and eastern New Mexico where Contrails, and maybe chemtrails, affect the micro-climate.

KC-135s are the principal tankers spraying diluted hazardous materials into the atmosphere.

Email ThisBlogThis!Share to TwitterShare to FacebookShare to Pinterest
piled in Earth, I-25, montana, red state failure, us politics, wyoming

Disaster declaration results from the Christmas 2016 storms that hit much of South Dakota are enriching Butte Electric, Grand Electric and others...again.

The South Dakota Republican Party owns the state's public utilities commission so this is how red states finance infrastructure improvements while bitching about Big Government.

Several utilities are based in South Dakota because of the state's regressive tax structure: Northwestern Energy and Black Hills Power among them.


Officials say five electric cooperatives are using state and federal disaster funds to bury hundreds of miles of power lines to protect against widespread outages from storms. The cooperatives are burying more than 530 miles of line damaged in a powerful storm that struck 14 western South Dakota counties last year. Officials say the cost of the line-burying project is estimated at more than $32 million. The Federal Emergency Management Agency is paying 75 percent of the cost. The state provided 10 percent and the cooperatives paid the remaining 15 percent. [Associated Press]

That 10% the state kicked in also came from the feds. 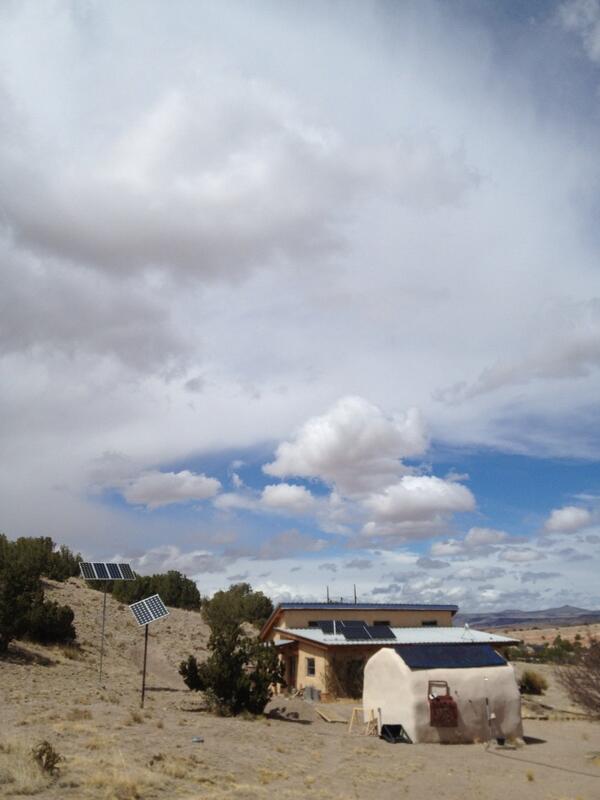 Remember, too, that these utilities are not Google or Facebook. They are not accustomed to a state of constant market turmoil and reinvention. This is a venerable old boys network, working very comfortably within a business model that has been around, virtually unchanged, for a century.--David Roberts at Grist

In 2010, some of the state's American Indian nations were left without power for many weeks because utility companies have succumbed to the moral hazards of disaster declarations that pay them to replace ice-downed power transmission lines year after year.

Now, it's happening again but this time white people are being put upon.

The grid is exceedingly vulnerable to attack and the federal costs of replacing infrastructure every year could finance every West River subscriber's self-sufficiency.

Horizontal axis turbines wired into the grid kill birds, bats and enrich power companies. For the cost of subsidizing, manufacturing, erecting and maintaining just one of these leviathans a thousand homes could be taken off the grid.

Get off the grid before the grid gets off you.

Update update, 14 February, 0750 MDT: faux flagstone is nearly complete. What do you think? 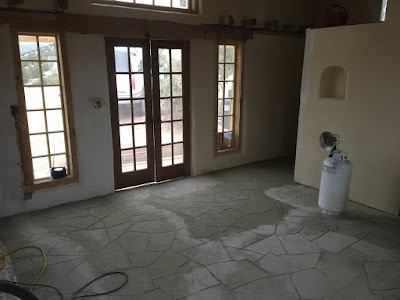 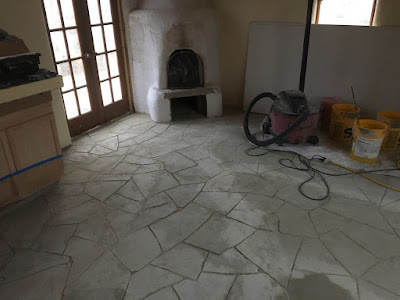 Email ThisBlogThis!Share to TwitterShare to FacebookShare to Pinterest
piled in ip, pix


Adults over 21 would be able to legally buy, possess and smoke marijuana under a bill that survived its first hearing Saturday in the state House of Representatives. The Consumer and Public Affairs Committee voted 3-1 to advance the bill without a recommendation. Sponsored by Rep. Bill McCamley, D-Mesilla Park, House Bill 89 moves ahead to the House Judiciary Committee. His proposal would tax and regulate recreational marijuana, as is done in eight other states, including neighboring Colorado. It would earmark 40 percent of taxes from cannabis sales for education and designate other proceeds to government programs. [Steve Terrell, Santa Fe New Mexican]

South Dakota has the most draconian cannabis laws in the US: the law enforcement industry can even force catheters into urethras and penises to test possession by ingestion.

Thanks to meth South Dakota's law enforcement industry enjoyed a 22 percent increase in drug arrests last year, the Republicans are out of cash to house inmates and civil forfeiture just isn't paying the bills.


Rep. Monica Youngblood has introduced House Bill 72 that would reinstate the death penalty in New Mexico. The historical trend is against the vengeance-seeking death penalty, but in the United States, the issue does emerge when we have an especially heinous crime like the sexual assault and murder of Victoria Martens. [op/ed, Santa Fe New Mexican]

In South Dakota capital punishment is a spectator sport costing taxpayers millions every year. Instead of spending a lifetime in Hell the state drags death row inmates through torture then finally liberates them by lethal injection.

Pollution from industrial agriculture has made waterways poisonous, the state has no modern statute addressing financial assurances for pipeline leaks. Trophy fishing for threatened species is a tourist activity. East River, South Dakota is a dead zone and likely a new repository for nuclear waste.