SDGOP: it's all good! 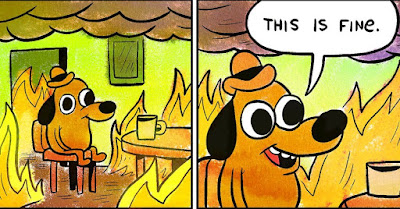 How do we know the South Dakota Republican Party is squishing under the weight of its own kleptocracy? Because Pat Powers is denying it.

South Dakota's chief executive is for all intents and purposes an autocrat. If he doesn't know something it's because he doesn't want to know it.

Earth hater former Governor Mike Rounds awarded $75 million in Future Funds without a public paper trail. He's now the state's junior US Senator. The party is ripping itself apart over who got that cash with the ultra-conservatives pointing fingers at the SDGOP establishment.

Future fund recipients, Kathryn Johnson, a member of the Board of Regents implicated in the EB-5/Bendagate scandal, and her husband, prominent Rapid City attorney, Doyle Estes, each gave South Dakota's current governor $4000 in 2014.

If it's tagged for American Indian education in South Dakota you can bet white Republicans will get rich paying to play.

Jim and Mary Scull are Future Fund recipients; also, they have given at least $3000 to help reelect South Dakota's current GOP governor. J. Scull Construction Services has enjoyed years of tribal contracts mostly funded by, you guessed it: the US Department of Education.

Over 54% percent of respondents at a Yankton Press & Dakotan reader poll disapprove of the current governor's job performance. Republican Denny Daugaard is saying investigators are looking in the wrong places for corruption in his party.

South Dakota has one reporter covering state government in Pierre full time. One. And Bob Mercer can't come right out and say the town is awash in corruption because he's been told he and his family are in danger if he does. If he implicates a player he knows he will lose his access. His ill health even restricts better coverage.

Sure, Jason Gant and Pat Powers were a bumbling pair of plumbers. And yes, Pierre is a sewer of biblical proportions.

Powers has been castigating members of his own party for even trying to get to the bottom of the graft and crony capitalism in Pierre. He's even accused State Senator Stace Nelson and gubernatorial candidate Lora Hubbel of being too Republican.

Because he's been implicated in helping to erase evidence, he hacked or allowed hackers into the state's IT grid and Secretary of State Shantel Krebs knows it. After he threatened her with political retribution she blocked Powers from her social media pages.

Powers has even exhibited some paranoia about his personal safety after EB-5 player, Rich Benda was found dead in a shelter belt with a shotgun tied to a nearby tree.

Pat's wish give up the ghost is my devotional psalm. No doubt he opposes Right to Die measures because if it passes he'd be among to first in line to end it all.

Unless South Dakota arch-conservatives mount third party or indie runs for US House, governor, attorney general, auditor, secretary of state and the Public Utilities Commission their lamentations for being marginalized by the establishment is just sauce for the turds they keep eating every day for breakfast.

Whatever it takes to bring democracy back to my home state.