DiSanto steps in dog shit, could smear SDGOP with it 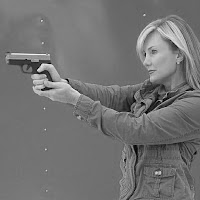 Her employer has dropped her, so has Working Against Violence.

Recall DiSanto supported the actions of the sleeper cell of armed christianic militants who held a federal wildlife refuge in Oregon. While she is representative of Republicans throughout West River the South Dakota Republican Party won't tolerate losing the seat to a Democrat.

She's a ticking time bomb. Expect her to vacate the District 35 state house seat she holds so Denny Daugaard can appoint a replacement for the upcoming 2018 legislative session who is at least as offensive and to appeal to the lowest Republican common denominator during the 2018 election cycle.

Bo Sistak has announced his intention to run for the seat.

A Democrat is nearly ready to announce a run for the District 31 senate seat now held by Bob Ewing.

Update, 1607 MDT: SDGOP says she won't be reprimanded for advocating vehicular homicide. If she leaves the legislature it will be her own choice (wink, wink). Story here.
Posted by larry kurtz at 7:24:00 AM