Air Force schedules another round of albedo modification over PRTC 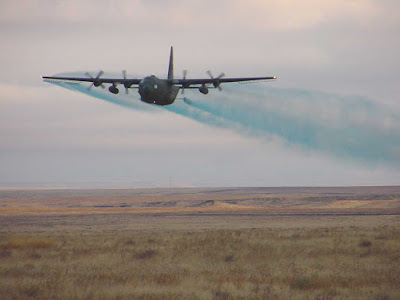 The photo above features a C-130H sprayer based at Mountain Home Air Force Base, Idaho.

As South Dakota's senior US Senator chortles over the Trump Organization's plan to spend at least $500,000,000 on each new B-21 bomber and nearly three quarters of a $TRILLION on a proposed Defense Department budget instead of really making America great again, US Air Force officials have scheduled another round of aerial exercises over the Powder River Training Complex.

Included in the war games are sprayers that disperse chemicals formulated to reduce the effects of climate warming.

In the name of geoengineering or albedo modification the Air Force routinely sprays an aerosol cocktail of silver iodide, lead iodide, aluminum oxide, barium, frozen carbon dioxide, common salt, water and soot from burning hazardous waste in pits at US Air Force bases including those at Ellsworth AFB near Rapid City, South Dakota into the atmosphere over the ocean and above parts of at least four states.

Chemtrails have been observed by the public and by general aviation pilots in the expanded practice bombing range.

General aviation, private pilots, climate watchers, even some Republican landowners and ranchers are concerned the exercises could exacerbate drought conditions that persist in a region where dried grasses are causing extreme fire danger.

Ellsworth AFB is home to a Superfund site so are Malmstrom AFB, Montana; Minot AFB, North Dakota and FE Warren AFB, Wyoming. All participate during the so-called "Combat Raider" deployments.

C-130H aerial sprayers have recently been deployed to spread chemicals over low-income areas of Houston after Hurricane Harvey.
Posted by larry kurtz at 6:49:00 AM