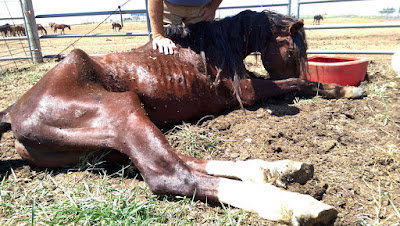 Back in May the Trump Organization proposed slashing $10 million and 29 positions from the Interior Department’s wild horse and burro program.

Funding for birth control would be cut and the Bureau of Land Management would be allowed to sell horses protected under a 1971 law to be harvested and the meat sold mostly abroad.

Because they have no natural predators feral horse herds double in size every four to five years. “You don’t have wild horses anymore. You have their bodies, but they are … domesticated,” said one researcher. The modern horse was introduced to North America by the Spanish late in the 15th Century and then by other European colonizers.

Acquiring the horse in the 1740s enabled the Lakota to win the Black Hills.

In Montana, Wyoming, New Mexico and seven other states the BLM adopts out, seeks private pastures for, and feeds the horses. The cost of keeping feral horses in holding pens off wild lands costs taxpayers at least $49 million annually.

Wyoming has the second-highest feral horse population in the country with 7,144 of these horses. The BLM’s target is 3,725.

There are an estimated 75,000 feral horses roaming the Navajo Nation, "ravaging the range and depleting water sources."

The United States sends more than 12,000 horses across the southern border for slaughter ultimately bound for markets in Europe and Asia.

Historically unserved or underserved by conventional financial institutions Native communities have been largely isolated from the food web. At least one American Indian tribe in South Dakota has shown interest in operating an abattoir as an economic development opportunity. Citi is quietly seeking a piece of tribal gaming announcing a 'major contribution' in support of Native Community Development Financial Institutions.

Ironic that in a country that exports more weapons of mass destruction than all others combined and relentlessly hunts nearly anything that moves Equus ferus is still seen as a pet.

In an era when western states are scrambling to preserve habitat for bison, wapiti, bighorn sheep, pronghorns, deer, the threatened Greater sage grouse and all the other wildlife at risk to the Republican Party how is running nurseries for introduced species like wild horses and burros either conservative or sustainable?
Posted by larry kurtz at 11:31:00 AM