Democrats in New Mexico and elsewhere blazing toward legalization 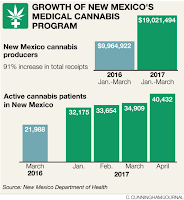 
“I am committed to working with the Legislature to move towards legalizing recreational cannabis in a way that improves public safety, boosts state revenues, and allows for New Mexico businesses to grow into this new market.” Lujan Grisham, a former state health secretary, said, “I am proud to have presided over and supported the successful roll out of New Mexico’s medical cannabis program.” [Santa Fe New Mexican]

Democrats are saying as much as $400 million raised in the first year could be going for education and transportation fixes.

Under term-limited Governor Susana Martinez New Mexico unemployment rates are the worst in the United States while enrollment in New Mexico's therapeutic cannabis program has soared above the 40,000 member threshold.


So, legalization initiatives have a clear Democratic benefit. Democratic-leaning voters, who otherwise might have stayed home, could turn out to vote on marijuana reform. Some may leave other parts of the ballot blank, but Democrats could see a meaningful benefit overall. In a race that is close, a few thousand votes here or there could force an incumbent Republican Senator to pack up his office or shift a state’s electoral votes from red to blue. [Brookings Institution]


Apodaca’s father, former governor Jerry Apodaca, was governor when New Mexico became the first state to legislate the medical use of cannabis in 1978 through Controlled Substances Therapeutic Research Act. But Apodaca says cannabis could be more than a driver of jobs: It could also be an area where New Mexico’s universities lead other states in research and development. “If they can create 34 different strains of green chiles, are you telling me we can’t lead the world, the country, in [cannabis] research from our university?” [Santa Fe Reporter]

Legal cannabis has become a favorite in Minnesota's Democratic-Farmer-Labor Party gubernatorial primary, too. Even so-called 'moderate Democrats' are on board.

And in California tribal nations want compacts with the state.


“Just like gaming, it’s our sovereign right to get into this industry without compromising our rights,” said Blue Quisquis, President of Emerald Enterprise and Sapphire MJ Solutions, who has an extensive background in gaming operations and is now helping tribes enter into the cannabis market. “We organized C-NACA to build tribal support and to educate our fellow tribes about all aspects of the industry." [Indian Country Today]

Democrats are keenly aware that to energize millennials and a jaded base radical times call for sensible approaches to reforms of civil liberties for all adults even if it means enduring some feces-throwing from the earth hater Big Food, Big Booze, Big Pharma, NFL set.
Posted by larry kurtz at 6:49:00 AM

Email ThisBlogThis!Share to TwitterShare to FacebookShare to Pinterest
piled in cannabis, I-25, montana