Rapid City's daily newspaper is an earth hater rag where the obituaries are usually the only real news.

It just ran an anti-cannabis editorial from the Colorado Springs Gazette, itself a conservative tabloid.

Not surprisingly, the meme chose yet another slippery slope to vilify cannabis instead of revealing the Springs will likely see a 2018 ballot issue that would bring full adult casual sales like nearby Manitou Springs brought. The Springs have so far forbidden the sale of anything but therapeutic cannabis in the second most populous town in Colorado.

A University of Denver study revealed Colorado Springs could raise more than $25 million in a year if it legalized and Citizens for Safer Neighborhoods spokesman Mike Elliott is trying to convince voters that the city should have the revenue instead of giving it to the thriving black market. A majority of six council members could enact an ordinance allowing cannabis sales to all adults.

A study (pdf) mandated by Initiative 502 the Washington State Institute for Public Policy concluded ingestion by youth and cannabis-abuse treatment admissions have not increased since legalization. 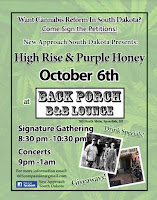 Rapid City is a military town like Colorado Springs and situational awareness is paramount for national security especially now that a sociopath holds the US nuclear codes.

But, under a compact between tribes and the State of South Dakota the revenue generated by cannabis sales on off-reservation properties in and around Rapid City could bring prosperity to the American Indian community, help Pennington County fix roads and the city as they cope with Republican myopia.

Maybe, North Rapid residents could even have its own grocery store within walking distance.
Posted by larry kurtz at 9:11:00 AM

Email ThisBlogThis!Share to TwitterShare to FacebookShare to Pinterest
piled in cannabis, I-25, sd politics, tribes