Walk the line: from JBS to Murdoch and to school shootings 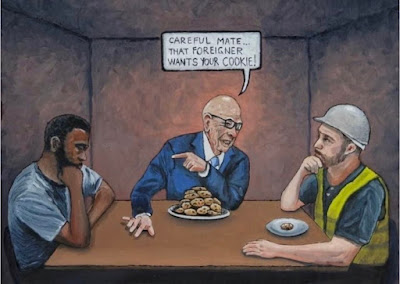 Blurring one line between church and state America's founders extolled the virtue of education as local schools were run both by christian sects and by local municipalities under the Tenth Amendment to the US Constitution.

But it was not until 1867 and Reconstruction made public education a federal prerogative when President Andrew Johnson created a Department of Education as a proxy for race politics. Missionaries were hired then dispatched to the Deep South to provide schooling for whites and Negroes alike and Roman Catholics were enabled in the American West to assimilate Indigenous youth. Congress was incensed then demoted the Education Department after a year making it part of the Interior Department yet abuses continued.

Fast-forward to the Red Scare, Brown vs. Board of Education, President Eisenhower then to the 1960s when the Elementary and Secondary Education Act was passed to relieve some of the effects of poverty and segregation despite Section 604 which forbade federal control of education.

President Jimmy Carter created the modern Department of Education amidst the howls from Republicans who renounce the decision to integrate schools to the present day. Ronald Reagan moved to kill the Department of Education and when Republican Newt Gingrich was Speaker of the House he was all about getting rid of DoE, too. Then came No Child Left Behind and a DoE budget that exceeds $70 billion annually.

Recall Republican former South Dakota Governor Mike Rounds won election to the US Senate for advocating the dissolution of the US Department of Education and in 2015 the state's legislature passed a resolution to abolish it.

In 2018, a luncheon meeting in Vermillion hosted by the University of South Dakota Young Republicans went off the rails and off-script for then-Rep. Kristi Noem (earth hater-SD) who wanted to talk about her campaign to be a career politician but was overwhelmed by angry constituents abhorred by school gun violence and she blamed the victims! Today, Governor Noem is still planning to address the National Rifle Association in Texas after another murderous bloodbath there.

Charles Whitman, Richard Speck, Timothy McVeigh, Eric Harris, Dylan Klebold, Dylann Roof, Adam Lanza, Robert Dear, James Holmes, Eric Rudolph, Jared Loughner, Wade Michael Page, Eric Frein, Stephen Paddock, Nickolas Cruz, Dimitrios Pagourtzis, Payton Gendron and Salvadore Ramos all are or were christians. All these men were victims of bullying, isolation and ostracism. All had histories of extensive teevee usage, many to video game exposure and easy access to firearms. Distrust of government and race hatred factored in most, if not all of the episodes for which they are infamous.
To this day reservation border towns are influenced by the Klan, John Birch Society, the TEA movement and now by the extreme white wing of the Republican Party.

The Trump Organization was simply the latest obstacle to public education because it hates people of color and social equity, too. Add it all up: Rupert Murdoch, a a not-so-closeted racist himself, the Kochs, JBS, the Council for National Policy, the National Rifle Association, Fox News, Tucker Carlson, their attacks on public education and their fear of the "Great Replacement."

Senate Majority Leader Chuck Schumer accused Fox News of promoting White nationalist “Great Replacement” rhetoric and urged Fox Corp. Chairman Rupert Murdoch to end it. Schumer, in a letter Tuesday to Murdoch and other Fox executives, cited the racially motivated mass shooting in a Black neighborhood of Buffalo by an accused gunman who cited the idea of so-called ethnic replacement, as well as other mass shootings targeting minorities in recent years. [Bloomberg]

George Washington was a warlord because enslaved people afforded him cannon, muskets, powder and ball. And, if they were alive today he and President Jefferson would be horrified to learn the US is operating on a manual written in the Eighteenth Century. Abraham Lincoln and Theodore Roosevelt would be putting American Indigenous in concentration camps arguing it’s for their own protection.

But prohibition won't work. Yes, bullying can lead to massacres but when the US ended the draft in 1973 the number of mass shootings began to rise. Compulsory military service or police training might indeed be one way to slow gun violence. Enlistment could look like the Swiss model where soon after high school eighteen year olds would join for two years then re-up or enroll in the college or vocational training of ones choosing. Raise the civilian age of possession, operation and ownership of all firearms to 21, levy 100% excise taxes on the sales of semi-automatic weapons then tag the revenue for Medicaid expansion so parents have the resources to address the devastating effects of Fox News on American youth.

Republican complicity in school shootings is part of a larger political design to discredit the public sphere and get Americans to divest from the institutions of democracy, starting with schools. I was about to tweet about this but the Federalist makes the point for me ⬇️ https://t.co/1NLvO80Xoc

Peter Brimelow, a former National Review editor who now runs the racist website VDARE, celebrated the Roe news by posting on the alt social media site Gab: "Next stop Brown vs. Board!" pic.twitter.com/nYpfErOaVI

Email ThisBlogThis!Share to TwitterShare to FacebookShare to Pinterest
piled in catholics, manifesto, us politics