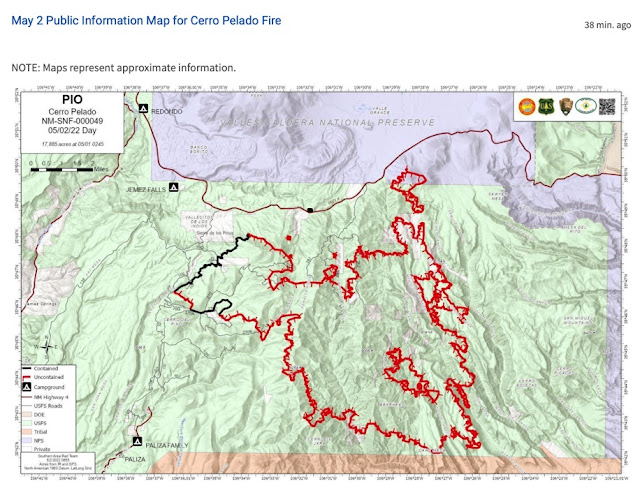 We've been lucky so far as smoke from the now 22,000+ acre Cerro Pelado Fire in the Jemez Mountains has yet to move into our space despite the most active portion of the wildfire is only about twenty miles from the ranch.
The blaze is moving in burn scars from the 2019 Conejos Fire, the 2017 Cajete Fire, the 2013 Thompson Ridge Fire, the 2011 Las Conchas Fire and in the 2000 Cerro Grande Fire. There are numerous slash piles along currently-closed NM4 in the higher elevations and places where low intensity fire has been recently introduced. The most visible portion from Red Rock Road is burning ponderosa pine (in an area called Ponderosa, no less) in steep terrain in the most western areas of the fire.
Los Alamos National Laboratory is not being threatened at this time although many locations within LANL are experiencing smoke and nearby Bandelier National Monument is closed.
Red flag conditions with strong winds and low relative humidities are testing resilience throughout the Santa Fe National Forest system.
The fire would have to cross the Rio Grande and I-25 to get to us.
Images captured in 2014 of the Las Conchas burn scar are linked here.