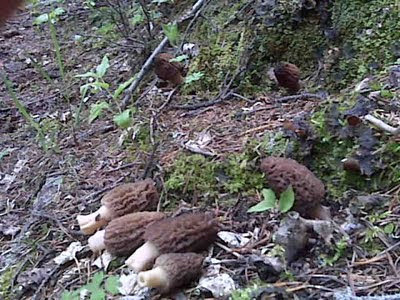 Picuris Pueblo has been battling with irrigators in the Mora Valley for water since 1820 when the first diversion from the Rio Pueblo de Taos, a tributary of the Rio Grande, became an acequia into the Mora, a tributary of the Canadian and Arkansas Rivers.
In 2018, the 30,000 acre grass and ponderosa pine-driven Ute Park Fire burned near Cimarron and the Buzzard Fire on the Gila National Forest cleared some 24,000 acres. The Black Fire is clearing more overgrowth today.
New Mexico has been home to a much larger aspen community in the fairly recent past. Morels fruit after fires in mixed pine/aspen habitat to entice animals to deposit organic material. Bison, elk and deer will crawl on their knees and loll their long tongues for morels fruiting under dead-fallen pine trees.
According to eyewitness reports the beaver are still working in upper Gallinas Canyon and green shoots are already coming up out of the ashes despite the ferocity of the Calf Canyon/Hermits Peak wildfire complex.
Before the European invasion Puebloans in northern New Mexico hunted bison on the high plains along the east slopes of the Sangre de Cristo Mountains and today Picuris is one of 76 tribal entities represented on the Rapid City, South Dakota-based Intertribal Buffalo Council (ITBC). Now, wildland fire is threatening the Pueblo.

Picuris Pueblo welcomed U.S. Sen. Martin Heinrich for a tour last Friday (May 13) of the tribe's buffalo program, which Picuris is working to expand by adding to its current herd of 50 bison in order to produce more products, as well as add more genetic diversity to its stock. "We put in an application through the ITBC for surplus bison," Danny Sam told Heinrich, who asked if the surplus included animals removed from Yellowstone National Park, which in 2019 began transferring surplus bison to Native American tribes. The House passed the Indian Buffalo Management Act in December, while an identical bill introduced in the Senate last October by Heinrich and U.S. Sen. Mike Rounds is awaiting further consideration by the Senate Committee on Indian Affairs. [Bringing the bison back to Picuris Pueblo]

Pojoaque Pueblo was the first tribal entity to raise bison on federal land and in cooperation with New Mexico Highlands University grazes a herd on the Rio Mora National Wildlife Refuge north of Las Vegas.

Brian Miller, a wildlife biologist and former executive director at Wind River Ranch, was the first to work with the InterTribal Buffalo Council to establish a bison conservation herd at the ranch. Wind River became the Rio Mora National Wildlife Refuge in 2012 — the same year the partnership was formalized. [Highlands Part of Unique Bison Conservation Partnership]

The Sandia Pueblo has been managing a bison herd since 2002, some with pure genetic stock from Wind Cave National Park in occupied South Dakota.
These days only about 500,000 bison inhabit North America or less than 1 percent of their historic range, just 3 percent of the Earth's land surface remains untouched by human development and a sixth mass extinction is underway. Urban sprawl, accelerated global warming and drought are reducing productivity on the remaining grasslands of the Great Plains, according Dr. Jeff Martin. He's the Director of Research at the Center of Excellence for Bison Studies at South Dakota State University. "The key is maintaining a high level of diversity and innovation to enhance sustainable solutions to climate change impacts. The Center of Excellence for Bison Studies aims to continue to support diverse, innovative, and precision research and practices for all bison stewards," he writes.
There are no mysteries here. Every incident like the Calf Canyon and Hermits Peak Fire is a teaching moment. These are episodes where humans are humbled by climate disruptions created by our own failures.
People who build in the wildland-urban interface do so at their own risk and not because they expect the feds to bail them out but because insurance companies won't cover fire-prone properties. Not talking about fuel treatments during a wildfire is akin to not talking about background checks during a mass shooting.
The solutions are simple. We must talk more about how stakeholders and policy makers interact with voters instead of reacting to Republican cattle and timber industry propaganda. We'll adapt or die.
Clear the second growth ponderosa pine, restrict non-native cattle, conduct fuel treatments, restore aspen and other native hardwoods, build wildlife corridors, empower tribal nations like the Picuris Pueblo and Confederated Salish and Kootenay Tribes in Montana then approximate Pleistocene rewilding with bison and cervids.
ip photo is of morels on the Beaverhead-Deerlodge National Forest in occupied Montana.

Spent the day at the Bison Range, which was recently restored to Confederated Salish and Kootenai tribal management. 🦬 ☀️ pic.twitter.com/Xy8R7z6EqA

The USFS has a 99.84% success rate with prescribed fires going as planned. This is a critical land management tool and, unfortunately, there are place elsewhere in the west that are missing the chance to burn because there are too few fire crews. We have to fix this https://t.co/kf7FpLQSQG

Email ThisBlogThis!Share to TwitterShare to FacebookShare to Pinterest
piled in Earth, I-25, manifesto, montana, pix, public radio, tribes, us politics