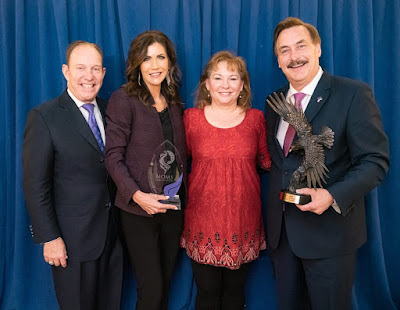 The Council for National Policy (to which Kellyanne, Bannon, the DeVos family, the Mercers, Pence… by @jennycohn1 https://t.co/Y2SFRIJn37

Ian Fury is Republican South Dakota Governor Kristi Noem's communications director and an operative of the Council for National Policy - a manifestation created by the extreme white wing of the Republican Party. Fury used to work for Representative Jim Jordan (NAZI-OH) who is also a member of CNP.
CNP has infiltrated Pierre and the extremist South Dakota Legislature because banks in my home state are hoarding nearly $4 TRILLION for its members including Robert Mercer, a Long Island hedge-fund manager who bankrolled Donald Trump's presidential campaigns. It’s important to note Kristi doesn’t write her tweets - they’re generated by her political campaign. Like Trump she’s using her post to milk the prosperity gospel for every penny she can hustle.
One reason Noem is working to defeat non-tribal cannabis in the red moocher state is that the CNP believes the white workforce will be too impaired so employers will have to hire brown people. She addressed a meeting of the body last August.
Noem is also a graduate of the Koch Brothers' American Legislative Exchange Council or ALEC, an anti-think tank think tank that teaches how wedge issues raise campaign dollars for the nut wing of the Republican Party.

The CNP’s 2014 vision statement, reproduced at the front of the directory, succinctly lays out its goal: “A united conservative movement to assure, by 2020, policy leadership and governance that restores religious and economic freedom, a strong national defense, and Judeo-Christian values under the Constitution.” Among them are Nelson Bunker Hunt; Richard DeVos, the co-founder of Amway whose net worth was estimated at $5 billion in 2012; and Foster Friess, a stock picker who was recognized in 2011 for contributions exceeding $1 million to the right-wing funding apparatus started by brothers Charles and David Koch. [The Council for National Policy: Behind the Curtain]

At Noem's behest Friess just gave $500,000 to a gaggle of religionist organizations in South Dakota.

“‘The idea that Georgia, of all places, could elect two communists to the United States Senate was ridiculous,” Noem said in her speech.’” https://t.co/DMFUfYAxQl https://t.co/88v99UWdz6