SD Stockgrowers join other Earth haters in resistance to Haaland 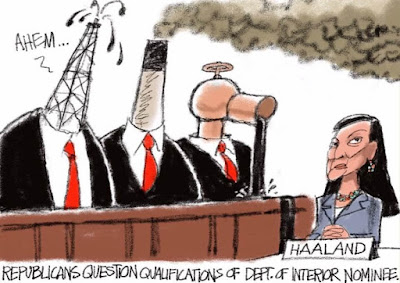 South Dakota Stockgrowers Association Executive Director James Halverson says his white nationalist cabal is concerned by Deb Haaland's confirmation because of her advocacy for wildlife and her support for the Green New Deal.
In 2019 Democratic New Mexico Representative Deb Haaland led a House subcommittee hearing on anti-government extremism emphasizing that the violent ideologies expressed by the Bundy clan were spurred by white elected Republicans in the Mountain West. The Bureau of Land Management has even hired a security specialist to outline strategies to defend federal employees and property.
Herr Trump's first Interior secretary blamed wildfires in the West on those he called “radical environmentalists” despite most acres burned were on private ranch land in Republican counties. On the final day of Trump’s presidency his last Interior secretary even restored a grazing permit to the Hammond Ranch who had set fire to federal land. Only a tiny fraction of public lands offered by the Trump Organization to the extractive industries were even leased yet Republicans see the Biden White House as hostile to their causes especially after the Hammonds' grazing permits were again rescinded.
Deb Haaland was confirmed as Secretary of Interior despite the racist bents of Republican South Dakota Senators John Thune and Mike Rounds, Wyoming Senators John Barrasso, Cynthia Lummis and the extreme white wing of the Republican Party. Montana Sen. Steve Daines, even called Rep. Haaland a “far-left ideologue” and a radical threat to the American “way of life,” another racist dogwhistle.
Today, restoring and rewilding American ecosystems are parts of the Green New Deal and with cooperation from Democratic South Dakota State Senator Troy Heinert more bison are coming home to the Nations.
In 2016 the SD Stockgrowers pressed officials at Ellsworth Air Force Base near Rapid City to keep ranchers informed of the Combat Raider exercises over the Powder River Training Complex. Those war games have since been suspended after public pressure and the failures of the Trump Organization to maintain military readiness.
If cattle grazing is the key to preventing wildfires why is Republican ranch country still suffering near daily high or even extreme grassland fire danger indices so often even during winter?
Cartoon: Pat Bagley, Salt Lake Tribune. 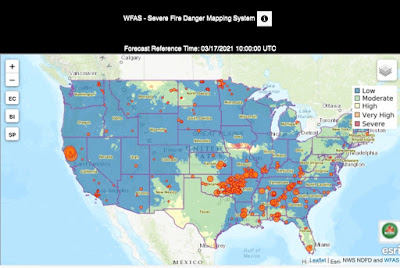 Email ThisBlogThis!Share to TwitterShare to FacebookShare to Pinterest
piled in Earth, I-25, tribes