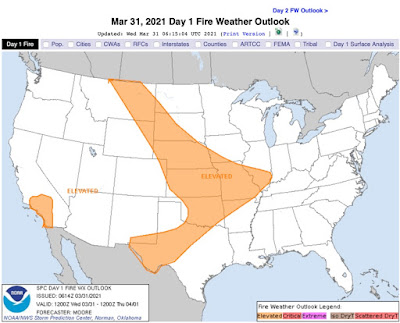 So, what do all the counties in today's critical wildfire risk have in common? With the exception of a few in California and reservations on the High Plains they're all Republican.
It was virtually impossible to expect a worse Republican than Denny Daugaard as South Dakota governor but here we are. No emergency declaration for a pandemic but when private property is threatened so be it.
Recall candidate Daugaard drew gasps from a South Dakota State Fair audience in 2010 when he said: “I am skeptical about the science that suggests global warming is man-caused or can be corrected by man-made efforts." Joe Lowe called Daugaard incompetent and uninterested in governing.
Yes, as the horses are incinerated the current Republican South Dakota governor finally orders the barn door closed until at least June 1st. The Divide Fire in Perkins County has consumed at least 8000 acres of invasive grasses and the Dry Creek Fire northwest of Murdo has cleared almost 10,000 acres. Livestock producers in Perkins County alone have received over $14 million in subsidies since 1995.
The cost per acre of conducting a prescribed burn can top $2,000 per acre but because of contributions from FEMA and other sources wildfires can cost less than $50 an acre to manage. But if you live in the wildland-urban interface government can't always protect you from your own stupidity. The Rapid City and Pennington County Fire Departments have plenty of funding to help property owners to remove combustibles. But volunteer fire departments are irreplaceable as first responders to unexpected blazes and they should convince Congress to make sure the resources are there to sustain rural firefighters.
So, science was certainly not on my Kristi Noem political future bingo card but readers can learn more here. 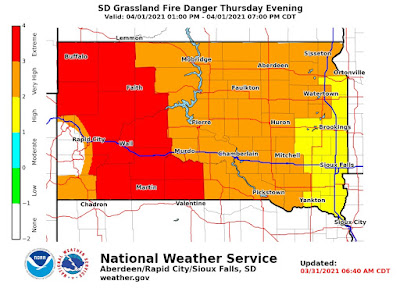 Remember this picture? This is Republican former #sdgov Denny Daugaard and his wife dressed up as the white supremacist couple from Duck Dynasty. https://t.co/tSMS70JOF4 #sdleg #Racism #southdakota pic.twitter.com/59txC3VIpX

“In retrospect, we spent far too much money on fuels reduction and not enough on assisting residents with the installation of fire-resistant building materials and landscaping.” #mtpol #blackhills #nmpol https://t.co/7lA4SYS0Tp