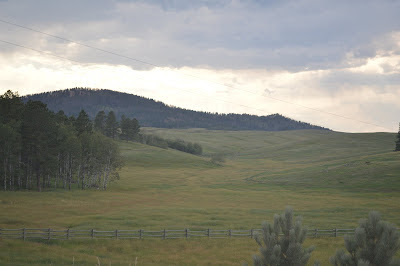 South Dakota's Republican politicians are just pawns of the intense timber lobbying efforts of Hulett, Wyoming based Neiman Enterprises, the extraction industry and from welfare ranchers addicted to cheap grazing fees. They have teamed up with Wyoming Representative Liz Cheney to make sure the Black Hills are reduced to piles of timber slash and mine waste.
Instead of allowing native aspen to be restored, stands of doghair ponderosa pine (ladder fuels that feed wildfires) cover much of the Black Hills National Forest. Spurred by the Neimans the Forest Service is still planting pine in the Jasper Fire area.
Thanks to the Trump Organization the United States is in debt to the tune of $22 TRILLION and US consumer debt is north of $74 TRILLION so the US is encouraging mining companies from outside the country to drill more holes in the Earth looking for gold and silver. The surging price of gold means Republicans and foreign miners see the sacred Black Hills as a sacrifice zone so now they want to buy land south of Lead from the Forest Service and deed it to the State of South Dakota. Brohm was an Australian company recruited by a now-dead Republican governor who gutted environmental protection in South Dakota.
Acknowledging there will always be acid mine drainage in the Black Hills the Republican-owned South Dakota Board of Minerals and Environment is dealing with still another devil who wants to strip mine the Gilt Edge Superfund site hoping the US Environmental Protection Agency becomes a tool of the extraction industry. South Dakota is no stranger to ecocide because it's a way of life in the chemical toilet. Under the General Mining Law of 1872 even foreign miners have carte blanche to rape the Black Hills, so they are. At least five transients want to poke the Black Hills but it's happening throughout the Intermountain West.
The Republican South Dakota Department of Ecocide and Natural Ruination has even awarded a water permit to a Canadian miner drilling test holes near Keystone and Rochford. Mineral Mountain Resources has been trucking water in 3000 gallon tanks from Lead for lubrication and wants to take at least ten gallons a minute from wells near the test holes. While exploratory holes normally take millions of gallons of water they tend to have minimal impact on the Forest itself but the drillers usually sell their data to bigger miners like Barrick, a Canadian earth raper.
Rochford area residents say British Columbia-based Mineral Mountain Resources destroyed Forest Service Road 184A during their drilling of some 7,500 acres in the Homestake Gold Belt on public lands and at a private site known as the Standby Mine Target.
Wharf Resources has filed a Notice of Intent to do exploratory drilling in a new area close to its current strip mine and cyanide leach pads in the Northern Hills where it recorded $72.5 million in profits for 2020.
Jim Neiman’s Devils Tower Forest Products enjoys a virtual timber monopoly in the Black Hills whose customers include Pella Windows and fellow Republican backer Menards.
Photo is of a meadow west of Rochford near Pe'Sla.
Learn more about the war on the Black Hills here and more about the rape of water supplies here.
Posted by larry kurtz at 5:14:00 AM

Neiman will close the mill in Hill City after blaming the Forest Service for protecting old growth: Rapid City Journal