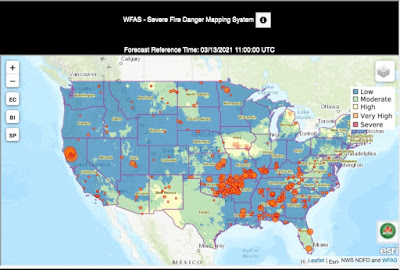 See that severe wildfire risk over southern Iowa? That's evidence of desertification in a state that doesn't give a shit about land use. Ethanol being grown for motor fuel is produced by burning diesel fuel. How is that conservative or sustainable?
South Dakota's socialized dairies are wreaking habitat havoc all along the state's border with Minnesota and like most of the state, southwestern Minnesota and northwestern Iowa are Republican strongholds where dairies, swine units and other concentrated animal feeding operations (CAFOs) have devastated water supplies by contaminating wells with nitrates. Now, because of environmental degradation driven by CAFOs officials with the Lewis & Clark Regional Water System (LCRWS) want to expand output from its current 45 million gallons per day to 60 million gallons per day.

Just 1% of farm aid recipients collected 23% of subsidy payments in 2019, up from 17% in 2016, as former President Donald Trump’s trade bailout swelled payments to farmers. Their portion crept up to 24% in the first half of 2020, the most recent period covered in the data, as farm aid hit a record level with coronavirus relief payments, according to the Environmental Working Group analysis. [Farm Forum]

If this were happening under President Obama it would be called socialism or worse. Democratic former US Senator Tom Daschle gave the keynote address at the South Dakota Farmers Union's virtual December 9th convention where SDFU President Doug Sombke learned members overwhelmingly oppose merging the SD Departments of Agriculture and Environment and Natural Resources.

Sombke and NFU are spearheading a “Repeal & Replace” campaign along with ethanol producers and other organizations to ensure the announced revision of the previous administration’s Safe Affordable Fuel Efficiency rule increases the minimum octane standard in U.S. gasoline and recognizes the significant carbon sequestration benefits of corn ethanol. [Farm Forum]

On this date in 1973 Democratic South Dakota Governor Richard Kneip lost his bid to create a state income tax believing it would easily pass the Democrat-controlled legislature. Today, South Dakota's maniacal legislature is dominated by Republicans who ignore the effects of the Anthropocene and lobbyists line up to stuff their pockets with cash. The Chinese ring-necked pheasant isn't wildlife but it is a canary in a chemically and genetically engineered corn mine as industrial agriculture is driving soil salinity and the eutrophication of the Gulf of Mexico.

Because E-15 is so unwanted by consumers that “Our product is still 88% gas” is their best marketing angle.

"So you’re looking at what they believe is the social cost which ultimately will always have a negative impact, right, particularly when you look at agriculture’s contribution.” https://t.co/LJwrLUGH2w