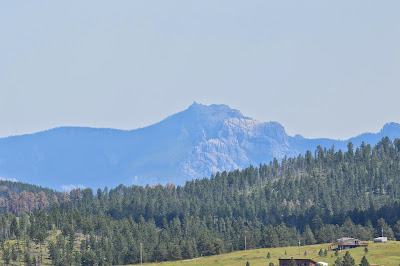 Veteran South Dakota reporter and columnist, Tom Lawrence agrees that it's time to erase another war criminal's name from South Dakota maps.
A state park, a peak, a county and a town in the Black Hills, a county and national forest in Montana are named after a murderer. During the Battle of Greasy Grass on the banks of the Little Bighorn River in Montana George Custer attacked the encampment where the elderly, women and children were hidden and during the Washita Massacre he held a similar contingent as hostages and human shields.
George Custer, Phil Sheridan, George Crook and William Harney all committed crimes against humanity yet their names still besmirch numerous government and geographical features. Crook City near Whitewood and Crook's Tower, one of the 7000 footers in the Black Hills, were named after a war criminal.
Revisionist history turned the Wounded Knee Massacre into a battle now Senator Mike Rounds (NAZI-SD) said he won't vote for the Senate companion to the Remove the Stain Act that would rescind Medals of Honor for twenty war criminals responsible for the slaughter of children, women and men in 1890 at Wounded Knee in occupied South Dakota. But he and the South Dakota Republican Party are hardly the only racists in the colonized American West.
After successes by tribal nations renaming geographical features in Alaska and South Dakota Yellowstone National Park could see at least two name changes. Hayden Valley memorializes Ferdinand V. Hayden who advocated for the extermination of tribal people and Mount Doane is named for Lieutenant Gustavus Doane who led a massacre of the Piikani, part of the Blackfoot Confederacy.
Senator Lisa Murkowski and the US Park Service succeeded in what Alaskans asked of Congress after urging the body to approve a name change for North America's highest peak to Denali, an Athabascan name meaning “the high one.”
Senators Cynthia Lummis and co-sponsor John Barrasso have introduced a bill to permanently cancel Indigenous culture by blocking the name Bear's Lodge or Mahto Tipila from Devils Tower National Monument in the Wyoming Black Hills.  With Democrats controlling the White House, both chambers of Congress and after a tribal member just became Interior Secretary with Park Service oversight the Wyoming Republicans' bill is likely doomed.

Custer spent precious little time in our state, and when he did he was breaking the law and hunting the people who called this land home. He was an Ohio native who attended school in Michigan and roamed the nation as a soldier. The current leadership of South Dakota would surely protest, saying this would erase history. That’s wrong, of course. Custer would still exist in the books and legends — he just wouldn’t be honored in South Dakota. It took 50 years to rename Black Elk Peak. Why not get started with the crusade to erase the name Custer from our map? [column, Tom Lawrence]

Learn more about efforts to compel Congress to the Remove the Stain linked here.
Photo: Black Elk Peak in the occupied Black Hills.

Email ThisBlogThis!Share to TwitterShare to FacebookShare to Pinterest
piled in Earth, manifesto, tribes