Sometimes, it just hits you in the face:


In a 2013 report from the U.S. Department of Health, South Dakota ranked lowest in the nation in vegetable consumption and in the bottom five in fruit consumption, according to South Dakota State University Extension. [Mitchell Daily Republic]

South Dakota's junior senator sat out of the budget vote.


The Omnibus budget bill that’s passed both Houses of Congress has essentially ended Horse Slaughter in the United States. There is no funding in the bill for Horse Inspectors at USDA. Without that, slaughter cannot proceed. R CALF CEO Bill Bullard says he’s disappointed by the vote but says there may be an outside attempt to change that legislation. Bullard says what’s really troubling is horse slaughter opponents have come up with no means of disposing of unwanted or older horses. [WNAX Radio] 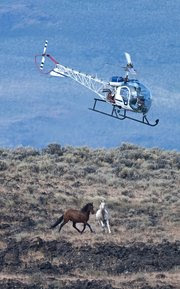 The modern horse was introduced to North America by the Spanish late in the 15th Century.

The BLM argues that reducing herd sizes are necessary to protect the range and to keep the horse populations healthy into the future.


Surrounded by South Dakota's open prairie, the rectangular home with its red-metal roof is one of four prototypes the local nonprofit Thunder Valley Community Development Corporation is building with South Dakota college students and the University of Colorado Boulder's Native American Sustainable Housing Initiative. Others will feature compressed-earth blocks, structural insulated panels made of plywood-faced foam, or standard wood framing. Thunder Valley is just one of many recent green-building efforts undertaken by tribes nationwide to attack housing shortages and offer alternatives to the standardized, often prefab "HUD homes" – that is, those built by the U.S. Department of Housing and Urban Development – common on reservations but often ill-suited to local climate and culture. [Nate Seltenrich, Building better homes in Indian Country, High Country News]


A familiar voice is screaming from the wilderness:


Troy Jones likes to spin truth into lies. Can he take Daugaard's $4.266 billion budget and say it is a not a 15.5% increase over the $3.693 billion spent in the year ended June 30,2013. Instead of spending time covering the rear ends of the SDGOP Establishment, maybe his time would be better spent on finding out where the extra $573 million is going. [Steve Sibson during a brief moment of lucidity with links from me.]

Even Senator don Juan Thune (earth hater-SD) gets it:


In the push to transition to renewable energy sources, coal has come under the crosshairs of the Obama administration, Thune said. In September, the EPA released regulations for carbon emissions from new coal-fired and gas-fired power plants, under the authority of the Clean Air Act. Those regulations will drive up electricity costs in South Dakota, Thune said, because “50 percent of energy in South Dakota comes from coal-fired power plants.” [Luke Hagen, Thune says energy debate coming, Mitchell Daily Republic]