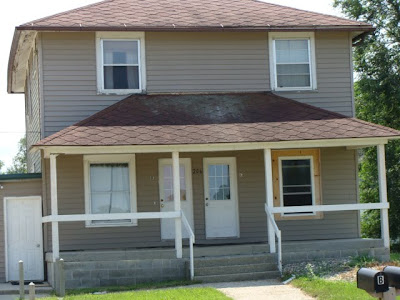 The house looks great, maybe even like a Hereford with braces.

A duplex, moved onto a newly-poured basement in 1973 by Paul Prussman, graces the south side of Harvey Dunn Street kitty-corner from Sexauer Park. Four brave new men were the first renters.

Fall semester 1974, the left door was blocked and the right door opened onto a landing and split to the second floor. Pink Floyd posters adorned the staircase leading to the second-floor kitchen where the grapes of acid spaghetti wrath were stored. First floor on the left in the living room exhibited empty RETURNABLE Buckhorn Beer cases holding book shelves when Buckhorn was $2.75 a case.

My room was on the right, first floor. Kim was in the first floor southwest room. Bobby was second floor northwest, Michael, second floor southwest. There was a room full of LPs and Michael's big fucking stereo with four turntables. On one summer night, the speaker that was in the upper left window came tumbling off that porch roof while a hundred party-goers exclaimed, "Wwooww!" Mike still has those speakers.

Email ThisBlogThis!Share to TwitterShare to FacebookShare to Pinterest
piled in ip, pix