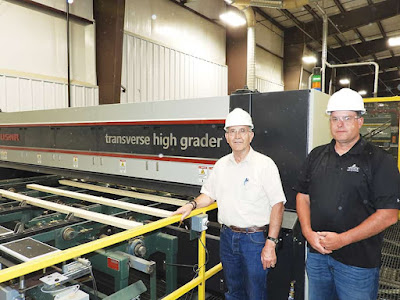 The Black Hills National Forest has been "beat to hell" after Republican donor Jim Neiman pressured officials to overlog but in Lawrence County, South Dakota where Neiman is threatening to close another mill, increases in sales of saw timber have so far been deprioritized in the BHNF's revised plan.

Blaine Cook and Dave Mertz are just two former Forest Service employees concerned about the 13,000 acre Bull Springs Timber Sale in Custer County. According to Mertz there haven't been any litigators to sue the Forest Service allowing Republicans to infiltrate management of the Black Hills National Forest. Neiman waited until Donald Trump was forced from the White House then shuttered his sawmill in Hill City, South Dakota and blamed the Forest Service. One needs to look no further than the BHNF for how politics has completely altered a landscape but there are plenty other public lands examples that illustrate the red state, blue state divide.

Neiman purchased Montrose Forest Products in Colorado in 2012 but in 2018 after the Trump Organization gutted the National Environmental Policy Act (NEPA) Neiman shipped twelve loads of timber from the San Juan National Forest to mills in South Dakota. Neiman wants to log 20 million board feet of ponderosa pine per year in Colorado for the next 20 years. Knot-free old growth ponderosa pine is coveted by door and window manufacturers like Pella, Marvin and Andersen.

The Biden administration has been slow to restore the NEPA rules Earth hating Republicans like South Dakota's John Thune and Wyoming's John Barrasso want to suspend. So, as expected, Hulett, Wyoming-based Neiman Enterprises could enjoy the fruits of socialism as the two Republican US Senators introduce a bill to inject taxpayer dollars into the Black Hills timber monopoly. They call the bill, The Save Jim Neiman's Ass Act. In 2012, Wyoming Public Radio’s News Director Bob Beck began an interview with Senator John Bare Asso (earth hater-WY) asking the question: "Senator, why do you hate the environment?"

The BHNF will clear the ponderosa pine from 10,000 acres of the 1939 McVey burn because they're off-site genetics and will replant native pine: KEVN teevee.