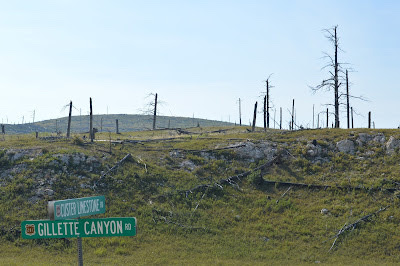 ip photo of the Jasper Fire area from 2015
I've known Hulett, Wyoming's Jim Neiman for over forty years. He's a ruthless negotiator and committed capitalist who would log the Black Hills into the dirt since he controls the Black Hills National Forest leadership and South Dakota's Republican congressional delegation. In 2002, the National Forest Protection Alliance (NFPA) named the Black Hills National Forest the third most endangered. Neiman Enterprises bought the Homestake sawmill in Spearditch in 2008. Now, after closing his sawmill in Hill City Neiman admitted 80% of the timber he has taken comes from public lands owned by the Forest Service. Neiman waited to close his mill until after Herr Trump was forced from the White House then blamed the Service.
Today, the Black Hills are tinder dry as an insect called the Ips engraver beetle is culling trees that are highly stressed by drought conditions. According to Kurt Allen, an entomologist for the US Forest Service in Region 2 impacts from the Ips beetle typically only last for two or three years but pine trees that are completely brown or red are dead and the beetle has moved on. The Forest Service generally allows the beetle to run its course and doesn't treat affected stands. Bark beetles shape water supplies throughout the Mountain West.
As many readers are aware the first US Forest Service timber sale took place in the Black Hills near Nemo but only after nearly all the old growth of every native tree species had already been cleared for mine timbers, railroad ties and construction. So, Republican South Dakota Governor Kristi Noem is correct when she said the Black Hills National Forest has been poorly managed. I maintain that has been happening since 1899 and Forest Service Case Number One.

When artist and environmentalist Mary Zimmerman bought property within the Black Hills in 1988, neighboring public lands where that first timber sale took place had regrown so successfully that huge branches overhead “were like a cathedral. ”The site was thinned in 1990, removing some big trees but leaving many. It was thinned more in 2016. Then logging crews returned last year and took out the remaining big trees. Cattle now graze the area. “It’s just beat to hell,” Zimmerman said. Her account was confirmed by Blaine Cook, forest management scientist for the Black Hills for more than two decades until his 2019 retirement. Cook said his warnings that the forest was being damaged were rejected by superiors who faced political pressure to provide a steady supply of logs to sawmills in South Dakota and Wyoming. [Matthew Brown, Associated Press]

In May the Neimans even bribed Black Hills State University to defend the logging they do on the BHNF.
Most of today's wildfire potential in the United Snakes is clustered in Republican counties and according to the National Interagency Coordination Center that trend will continue through at least October.
Posted by larry kurtz at 6:19:00 AM