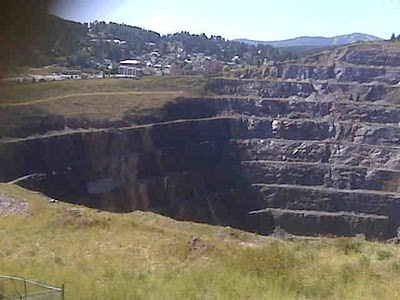 View of Homestake Visitors Center and proposed ice climbing location above the Open Cut from Old Abe Street
In 1999 we were listening to an NPR story about an ice climbing park in Ouray, Colorado, a former mining town that has remade itself by farming ice when my daughters' mother turned to me and said, "wow, they should do that in the Open Cut."
It was if she had spoken with the Voice of God. The very next day I made an appointment then met with Homestake Mine General Manager Bruce Breid, an aerial photo of the pit displayed on the wall behind his desk. "What a brilliant idea, Mr. Kurtz, we have water here, here, and here," Mr. Breid said, pointing to locations at the rim near the Homestake Visitor Center. "Can you provide a legal instrument holding Homestake harmless?" Right. There was that.
We all knew it was coming so on this date in 2000 Homestake Mining Company announced it would close its mine in Lead. But not long after the September 11 attacks and the anthrax hysteria, during an interview on SDPB Radio with then-governor Bill Janklow, a caller asked whether survivable space might be considered for the former Homestake Mine. After a familiar, but brief tirade, BJ the DJ said, "I can't talk about that."
The 2002 closure sealed the exodus of union miners to Nevada and Arizona erasing the Democratic base from the northern Black Hills and much of Rapid City.
After Janklow's successor, another former GOP governor dropped the ball by letting much of the mine fill with water Democratic former US Senators Tom Daschle and Tim Johnson brought the need for an underground research facility to Congress and worked tirelessly to bring the project to fruition.
In 2003, new owner Barrick announced the surplus of several properties. I led a group of investors to the Ross Compressor Plant, a magnificent architectural masterpiece that housed the three leviathan air compressors that had provided most of the pneumatic needs for the mine. They drove hundreds of miles of line lovingly and meticulously maintained by union workers for at least seven decades.
The winning proposal for the property would gain ownership of these massive machines. Having realized that these three compressors could slow water filling the mine, I attempted multiple contacts with the Rounds administration. Calls and emails to Jamie Rounds went unreturned. We presented our proposal to purchase that would have moved the compressors to a mining museum. The winning bidder sold them for scrap then went broke.
Neiman Enterprises bought the Homestake sawmill in Spearditch in 2008.
Today, naming a dark matter lab 5000 feet below Lead after a lecherous, usurious billionaire from Sioux Falls sticks in plenty of craws in South Dakota yet real science is getting done there. The Homestake Mine represents 8000 feet closer to the geothermal potential capable of powering much of the region. But South Dakota is dumbing down requirements for math teachers because graduates flee the state where the SD Republican Party ridicules educated people and perennially threatens funding for public radio.
Now, scientists and scholars are repopulating Lawrence County making ripples likely to test anchored Republicans.
Maybe.

Republicans today are much less likely than their predecessors in 1975 to have confidence in science. Meanwhile, Democrats today have more confidence than their fellow partisans did in the past. [Gallup]

Staff visited the future site of the Cangleska Wakan, the Sacred Circle Garden, at SURF. The garden will help visitors protect, respect and understand the area’s history, environment and connections we share.