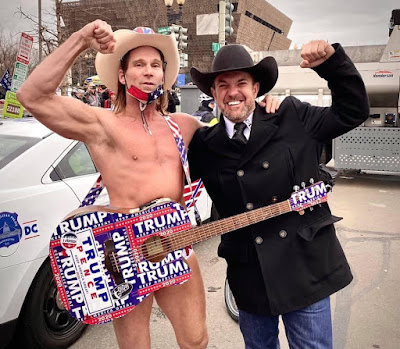 Time is running out for a recall effort aiming to kick Cowboys for Trump founder Couy Griffin out of office as a county commissioner in southern New Mexico. Supporters of the petition drive in Otero County say they still need to collect several hundred additional signatures by next Wednesday to trigger a recall election against Griffin. The petition accuses him of failing to attend commission meetings, using his elected position for personal gain in promoting a support group for [Donald Trump] and violating state restrictions on gifts to public officials. Separately, Griffin is facing misdemeanor criminal charges in the Jan. 6. insurrection on the U.S. Capitol, where he appeared on an outdoor terrace and tried to lead the crowd in prayer. The recall petition highlights Griffin’s pursuit of travel reimbursements from taxpayers in Otero County for a cross-country trip in 2019 that culminated in a visit with Trump at the White House. [Associated Press]

In a video posted at his Faceberg account Griffin invoked now dead domestic terrorist Lavoy Finicum who helped vandalize the Malheur Wildlife Refuge in 2016. The Mescalero Apache Tribe banned Griffin from their lands after he made racist and derogatory statements at his Faceberg page.
An eventual confrontation between second term New Mexico Attorney General Hector Balderas and a self-styled militia group is about to come to a head. After a 2019 shooting at a Walmart in El Paso, Texas AG Balderas asked the NM Legislature for funding to form a "special investigative unit to guard against hate crimes and terrorism." Enabled by spiteful, vindictive bombast from Herr Trump the hate group New Mexico Civil Guard has abandoned lawful protest and started shooting protesters. Balderas' office has also been investigating predator priests.
Republican leadership is an oxymoron. The faster all the deplorables taser themselves in the testicles until their myocardias infarct the better.
Learn more about White Replacement Theory at NPR.
Above image was lifted from the Cowboys for Trump Faceberg page. Griffin is the clothed deplorable in the photo.

“You could look at 2020 as the nadir of American democratic processes, or you could look at it as a dress rehearsal,” says elections expert Rick Hasen. I say: IT WAS A DRESS REHEARSAL. Our way of life is on the line. Tyranny awaits. https://t.co/2eHDLll0bK

Email ThisBlogThis!Share to TwitterShare to FacebookShare to Pinterest
piled in I-25, public radio, tribes, us politics

"‘A roadmap for a coup’: inside Trump’s plot to steal the presidency:" the Guardian.