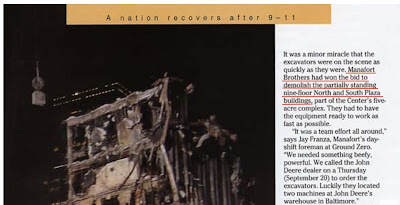 The Supreme Court of the United States caused 9/11.
Al Gore would have retained Bill Clinton’s security apparatus as the intelligence community was connecting the dots Mossad and IDF were leaving ahead of the event. Angel would not have been in the air that day if the plot had been uncovered.
Yes, I believe that 1, 2, and 7 were "pulled." That the buildings were dropped into their footprints with explosives during what some describe as a military/Deep State coup is entirely plausible. As we circle back to the events of 11 September, 2001 it's important to remember that had SCOTUS actually heard Bush v. Gore and ruled for Al Gore rather than upholding Jeb’s secretary of state (massive election fraud in Ohio notwithstanding) the entire head-lopping W performed on the chain of command would have been avoided. And, when you're appointed POTUS by your brother(s) or your father, you lop all the heads of those with whom you do not agree when you come to office because you're focused on deposing Saddam, the winner of the first Gulf War. CIA analysts were threatening to resign ahead of the event as the Bush cabal bobbled the ball.
There is little doubt in my mind that damning evidence linking the Trump Organization to the Port Authority and beyond was destroyed on 9/11. It’s impossible the Obama Administration didn’t know Donald Trump was being installed by a hostile government. The Deep State put Trump in the White House because they're the Mob, too and he’s leveling the other guys’ poppy fields and heroin distribution with bombers from South Dakota while leaving the friendly opiate trade to flourish. The Trump Organization is an equal opportunity money launderer doing it for CIA and other Deep State actors for decades.
The Bushes and Trumps are competing crime families with ties to the assassination of President Kennedy. On 22 November, 1963, CIA operative George HW Bush was photographed at the entrance of the Dallas Book Depository on that fateful day in Texas. G Gordon Liddy murdered Officer JD Tippit in Dallas in a botched plot to replace President John F Kennedy's body to hide the evidence of multiple shooters and nearly every member of the DPD was in on the conspiracy. JFK's fatal head shot was fired from a storm gutter at nearly point blank range. George W Bush spent nearly the entire month of August, 2001 in Texas preparing for the false flag narrative to follow the next month. The two Georges, Jeb and Marvin Bush are directly responsible for the events of 11 September, 2001. Why? Because the business of war is in their blood. Donald Trump's father, Fred is a JFK assassination conspirator hence those dox are being held up, too.
John Thune's rejection of Trump was a ruse. He already knew Donald Trump was a sleaze from his basketball buddy Jim Comey. That's right: the vast white wing of the Republican Party was going to beat Hillary Clinton at any cost even if it meant colluding with a sworn enemy of the United States, destroying the presidency and taking down the republic. So Thune made Congress look the other way as Russia and Cambridge Analytica conspired with Facebook to hack the election.
And, had former Secretary of State Hillary Clinton been elected in 2016 Paul Ryan would be president today. Her campaign knew that if Hillary won the rabid Republican House would have impeached her, the Senate would have removed her before the 2018 midterms and Trump would be on the sidelines egging them on. Somebody (Robert Mercer and Cambridge Analytica) promised Paul Ryan the presidency had Clinton been removed and Tim Kaine met an unfortunate end but that all crashed when Trump was installed. There’s no way in Hell the GOP would have given a President Kaine the time to choose a Veep.
Clinton sat in with the most sophisticated intelligence community on the planet, ferfucksake! She and her campaign knew the Russians, the Trump campaign, Mike Pence and the Republican Party were hacking the election and the battle over her private emails proves it. The tarmac meeting between Bill Clinton and Attorney General Loretta Lynch was to deliver a thumb drive containing the Steele Dossier to the Justice Department. It was likely an open secret Trump was already under the microscope. Hillary's campaign was phoned in at best so they gave Trump and the GOP all the rope they're using right now to hang themselves.

Most @HouseGOP members & about half @SenateGOP conspired with Russia in 2016 by taking money & concealing it. They all need to be charged. May make bail but should get no deals. IMO it's major reason so many House members retired. Chaffetz, Gowdy, Ryan and Issa for sure. @FBIWFO

Nearly 20 years since 9/11, we must challenge the "us vs. them" narrative at all costs.

Hillary Clinton's loss destroyed the careers of Jason Chaffetz and Trey Gowdy. Neither of them planned for a Trump win. https://t.co/ZUSgu663hP

Email ThisBlogThis!Share to TwitterShare to FacebookShare to Pinterest
piled in us politics

Yup. Every time I write about this I’m a conspiracy nut. No credible engineer or pilot believes the government version of events.

"National security" is an oxymoron especially in the time of Trump. Where can I read your stuff these days, bro?