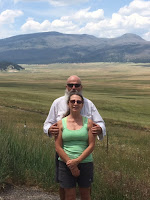 Longtime college friend, Kim and his sweetheart, Christina just spent his birthday week at the casita. We traded lodging for tickets to The Dead South who played at Santa Fe Brewing Company's new venue.

One day trip we took was from Bandelier National Monument through the Jemez Mountains--the attached image was captured at Valles Caldera National Preserve where some scenes from the teevee series Longmire were produced. Christina is a fire management specialist in Arizona so we were encouraged by how well the aspen and gambel oak are coming back in the Las Conchas and Thompson Ridge wildfire scars.

There are numerous slash piles along NM4 in the higher elevations and places where low intensity fire has been recently introduced. It looks like the Santa Fe National Forest is planning more prescribed fires but much of the grass is actually too green to fire very well.

Smoke from the Conejos Fire is clearly visible from Red Rock Road even this morning.

Il Trumpo has blamed California wildfires on the lack of logging with statements typically lacking in facts but the real culprits are decades of fire suppression, Republican entrenchment and a warming climate.


We just drove by this burn — plenty of smoke. It’s a sin prescribed burns cost so more than wildland fires to contain and control. #nmfire https://t.co/A1E5Jvnzbi
— interested party (@larry_kurtz) July 31, 2019