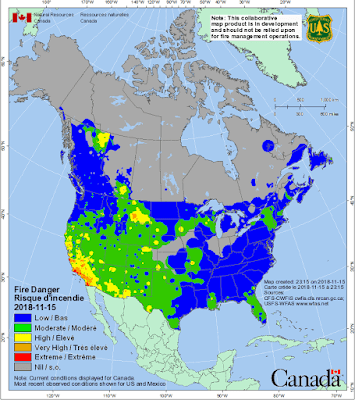 Global warming has been accelerating since humans began setting fires to clear habitat, as a weapon or just for amusement. Evidence that we humans have eaten or burned ourselves out of habitats creating catastrophes behind us is strewn throughout the North American continent. European settlement and the Industrial Revolution in the New World took hardwoods for charcoal then humans allowed fast-growing conifers to replace lost forests. Desertification driven by agricultural practices, overgrazing, concentrated animal feeding operations (CAFOs) and urban sprawl have turned much of the United States into scorched earth.

The Anthropocene is now.

Actually, some humans know how to slow planet warming, flatten the Keeling Curve and erase the carbon equivalent of every motor vehicle running in America today.


A new study published on Wednesday, however, found that better management of forests, grasslands and soils in the United States could offset as much as 21 percent of the country’s annual greenhouse gas emissions. The paper, published in the journal Science Advances, identified a number of promising strategies, like replanting trees on degraded lands, changing logging practices to better protect existing forests and sequestering more carbon in farmland soils through new agricultural techniques. “So much of this is tied to the way we grow food.” [Part of the Answer to Climate Change May Be America’s Trees and Dirt, Scientists Say]

The leaves of aspen and other native hardwoods reflect sunlight during spring and summer and after losing them in the fall hold winter snow packs while pine needles continue to absorb heat and accelerate snow melt warming the planet. Ponderosa pine and other conifers suck billions of gallons from aquifer recharges and are rich in volatile organic compounds that are explosive during wildfires while aspen slows crown fires. New Mexico and the Rocky Mountain West have been home to much larger aspen communities in the fairly recent past.

Not talking about fuel treatments during wildfires is akin to not talking about background checks during a mass shooting. Fact is: it’s far, far cheaper to bill the feds after a wildfire than it is to conduct prescribed burns. That’s because it's less litigious to ask for forgiveness than to ask for permission. The solutions are simple. We must talk more about how stakeholders and policy makers interact with voters instead of reacting to an industry-driven executive branch being forged by a Zinke-powered bellows.

It's that or legalize automatic weapons, end restrictions on the sale and possession of rocket propelled grenade launchers, let the carnage begin and get it over with.


We are not, and will not, experience a “new normal” of wildland fire behavior. A “normal” is a long term average that provides a useful guide to the future, but wildfire is responding to accelerating climate change: no one alive today will ever see a stable climate again. https://t.co/wyqnMz7AFP
— A. LeRoy Westerling (@LeroyWesterling) July 30, 2018

I put together a simple, but very sobering graph: The human-driven rise of atmospheric CO2 unimpeded by five successive warnings over the past quarter-century in the form of Assessment Reports (1990, 1995, 2001, 2007, 2014) from the Intergovernmental Panel on Climate Change. pic.twitter.com/FDR7bzv5tK
— Anthony Ricciardi (@EcoInvasions) November 7, 2018