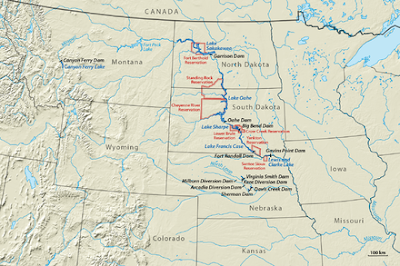 Throughout its history the US Army Corps of Engineers has had purview over water that flows into bodies that can support navigation and in 2014, through the US Environmental Protection Agency, the Obama White House moved to more closely identify the sources of non-point pollution. Despite a judge's ruling EPA went forward with a new federal rule protecting small streams, tributaries and wetlands. The Waters of the United States legislation sought to give authority to the EPA to use some teeth to enforce the rights of people downstream to have clean water even from some sources that the US Geological Survey has already identified as impaired.

The agency, in its request for comments on the proposal in December 2016, said the intent "is to enhance (the Corps') ability to cooperate with interested parties by facilitating water supply uses of reservoirs in a manner that is consistent with the authorized purposes of those reservoirs, and does not interfere with lawful uses of water under state law or other federal Law." [Associated Press]

Where the revenue would go that the Corps derives from charging for reservoir water remains a mystery but the tribal nations displaced by construction of the Missouri River main stem dams are America's most affected victims. More than a dozen Ihanktonwan survivors of the Missouri River dam flooding in the 1950s banded together to seek compensation through the Yankton Sioux Tribal Business and Claims Committee.

The tribal plan notes that more than $8 million was expected to become available to the Yankton Sioux for the first fiscal year of the government expenditure program, ending Sept. 30, 2014. The survivors’ families were fee-land owners and heirs who had obtained private property under an allotment act. Their holdings were not tribal lands, although they were considered part of the reservation jurisdiction, according to administrative and case law. [Talli Nauman, Native Sun News via indianz]

Lewis and Clark Lake is thirty percent full of toxic sediment. That impoundment and now the Big Bend Dam are dealing with newly-discovered zebra mussels which are causing problems to equipment.

The risk to upper basin states and Indian tribes is that once water is regulated as surplus water, and once it is consumed by end-users, it becomes that much harder to later re-institute the original legal, as well as declared beneficial uses of the water. [David Ganje]

The death of the Missouri River ecosystem in South Dakota began with the European invasion, was accelerated by the Homestake Mining Company and sealed with the construction of the mainstem dams. Today, the Corps has cancelled Spring Pulses on the Missouri River not because of low flows but because the silt is so poisonous it would kill the very species it says it's trying to preserve. Nearly a century of residue from Black Hills Mining District affects millions of cubic yards of riparian habitat all the way to the Gulf of Mexico. Although the Oahe Dam was completed in 1962 sequestering most of the silt the soils of the Belle Fourche and Cheyenne Rivers are inculcated with arsenic at levels that have killed cattle. Endangered pallid sturgeon, paddlefish, catfish and most other organisms cope with lethal levels of mercury throughout the South Dakota portion of the Missouri River.
Posted by larry kurtz at 6:45:00 AM

"The Trump administration has delayed an Obama-era proposal that could allow the federal government to charge for water drawn from reservoirs it manages. Army Assistant Secretary for Civil Works R.D. James says in a memo Monday that the U.S. Army Corps of Engineers will delay the Water Supply Rule 'for a minimum of six months to better integrate input from stakeholders.'” KNBN teevee