The production company for an upcoming series that airs beginning in June and stars Academy Award winner Ben Kingsley has been shooting in our neighborhood on the Santo Domingo Pueblo's portion of the Galisteo Dam Road, the Cochiti Pueblo's portion of the Tetilla Peak Road and at the Bonanza Creek Ranch. The soundtrack includes work from The Deep South scheduled to appear and perform at the Santa Fe Brewing Company in July. Sam Peckinpah shot a bunch of scenes for the 1978 film Convoy out here, too.


Since 2016, productions shot in New Mexico include six feature films, eight television series and another five TV pilots from Red River to Albuquerque to Las Cruces – employing more than 10,000 cast and crew, and 30,000 part-time extras. The film and television business has, since 2003, accounted for $3.44 billion in local spending – on wages and payments to New Mexico businesses that sell goods and services to productions. [Four stars for expanded NM film tax incentives] 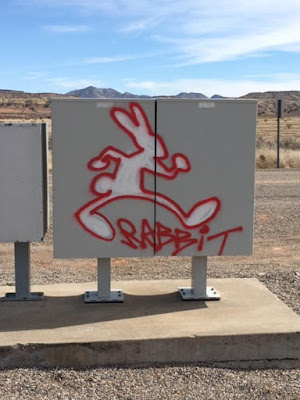 Somebody tagged the mailboxes on the Galisteo Dam Road!
Posted by larry kurtz at 7:58:00 AM

Email ThisBlogThis!Share to TwitterShare to FacebookShare to Pinterest
piled in I-25, tribes