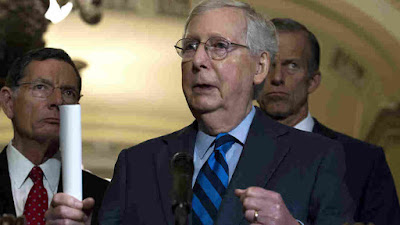 I’m often called a liberal by Trumpettes on Faceberg but liberals want to convert GOPers or convince them to be kinder and gentler. Me? As a progressive I’m actually working to destroy the Republican Party and erase it from the collective cultural memory.

This time Trump is the asteroid. That Republicans continue to prop up his assault on the courts and stoke his criminal race baiting is the most telling aspect of this march toward the abyss. Unless Republican Earth haters recognize the clear and present danger this president represents doom is imminent and there is nothing, nothing honorable men like General Mattis can do about it.

A marauding president has empowered the law enforcement industry to usurp civil rights while vilifying education and pimping for governors like Kristi Noem who was elected with a bare majority. Noem has simply become a pinup for the Kochs and boycotting South Dakota is apparently the only language the Republican Party seems to understand. Joining Natives in revolution may indeed be the only recourse.

9 May, 2016: former Facebook workers allegedly told Gizmodo they routinely suppressed news from conservative sources.
10 May, 2016: staff for Senator John Thune wrote a letter to Facebook then he and Republican National Committee chair Reince Priebus teamed up to threaten Facebook. "Senator Thune (R) once opposed the FCC's Fairness Doctrine now wants Q&A with Facebook about its trending topics."
11 May, 2016: John Thune accused Facebook of bias. Jim Comey admitted to combing Hillary Clinton's correspondence.
13 May, 2016: Thune asked Facebook to make space for all viewpoints.
18 May, 2016: Thune met with Mark Zuckerberg and a bank of lawyers. "Just about nobody, Sen. Thune included, wants the feds to police how Facebook displays news."
19 May, 2016: "The first step forward is for Facebook, and anyone who uses algorithms in subjective decision making, to drop the pretense that they are neutral. If I am reading their letter to Thune right, Facebook's response is to gut a perfectly defensible part of the process. Why? PR concerns atm (at the moment)."
23 May, 2016, in the name of "net neutrality" Thune and the Senate GOP said they won't regulate Facebook.
24 May, 2016: Facebook's 12 page response to Thune.
26 May, 2016: Trump cinches GOP primary.
31 May, 2016: Thune backs Trump.
3 June, 2016: Trump twitter bots began urging then-Senator Jeff Sessions to investigate censorship.
9 June, 2016: Trump, Jr. and Russian intermediaries met at Trump Tower to trade for dirt on Sec. Clinton.
5 July, 2016: Jim Comey recommended no criminal charges against Hillary Clinton.
27 July, 2016: dezinformatsiya, "Russian internet trolls were being hired to pose as pro-Trump Americans."
August and September: Clinton's correspondence on a private server became a Trump bot meme and somebody goaded the husband of Clinton's closest advisor to share inappropriate correspondence with an alleged minor.
8 October, 2016: Thune condemns Trump.
12 October, 2016: Thune flips again and backs Trump.
25 October, 2016: Rudy Giuliani on Fox News said that the campaign had an upcoming "surprise."
28 October, 2016: Jim Comey said he's going to reopen the FBI investigation into Sec. Hillary Clinton's use of a private email server. In an interview Clinton blamed Guiliani "and others" of leaning on Comey.
7 November, 2016: despite accusing Hillary Clinton of wrongdoing Comey said hours before the election there actually was none.
8 November, 2016: the end of the world as we know it.
"Nine days after Facebook chief executive Mark Zuckerberg dismissed as ‘crazy’ the idea that fake news on his company’s social network played a key role in the U.S. election, President Barack Obama pulled the youthful tech billionaire aside and delivered what he hoped would be a wake-up call." [Washington Post]
18 November, 2016: Thune: "Russia is constantly looking for ways to undermine and disrupt our democratic systems." Thune knows this because he plays basketball with James Comey. Comey and Obama didn't play basketball together nor did Obama and Thune. Thune's rejection of Trump was a ruse. He already knew Donald Trump was a sleaze from his basketball buddy.

That's right: the extreme white wing of the Republican Party was going to beat Hillary Clinton at any cost even if it meant colluding with a sworn enemy of the United States, destroying the presidency and taking down the republic.

Thune can't ever seek any higher office than he has now and unless he's indicted his term doesn't end until 2023. There are no media in his home state that aren't beholden to the Republican Party and although he went to DC without much money he's got at least $12 million now.

Facebook is malware. 3,000 ads with Russian links that were “the tip of the iceberg” supported Sanders, Stein and Trump.

The paper trail is clear. John Thune made Congress look the other way as Russia infiltrated Facebook and in Thune the Obama White House and Clinton campaign found the perfect stooge to pull off the sting that will dissolve the Republican Party.

Email ThisBlogThis!Share to TwitterShare to FacebookShare to Pinterest
piled in us politics