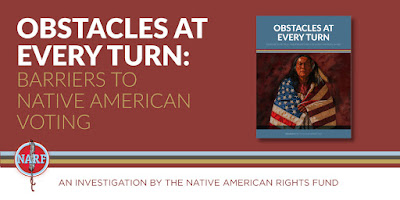 In 2017 South Dakota, Montana, Arizona and New Mexico were at the bottom of a list of Kids Count results published by the Annie E. Casey Foundation. If 1000 is perfect South Dakota came in dead last with a score of 220. The average score for the United States is a dismal 413 although African American kids fare even worse. In the US, where sovereignty rights, culture and language resurgence and growing capital resources from burgeoning black markets are building alternatives to hopelessness, suicide, and repression in Indian Country, deaths from firearm violence are higher than in any ethnic group. Even as the Trump White House threatens funding for programs on public radio, especially those designed for Native audiences, producers bring the war on tribes to the air waves every day and people are frustrated, angry and increasingly militant.

We all know Republican South Dakota Governor Kristi Noem is a racist but now my home state has gone from being America's laughing stock to becoming a co-conspirator in hate crimes. Noem has simply become a pinup for the Kochs and boycotting South Dakota is apparently the only language the Republican Party seems to understand.

Every federal department and agency already recognizes Native America as the 51st State. While the Palestinian homeland looks like holes in the slice of Swiss cheese analogous to the illegal Israeli state, progress toward resolutions of Native trust disputes would have far more political traction after tribes secede from the States in which they reside and then be ratified to form one State, the 51st, sans contiguous borders with two Senators and two House members as there are an estimated 2.5 million indigenous living on reservations.


The title of an expansive new report on Native American voting rights, "Obstacles at Every Turn," is no exaggeration in light of the document's contents. The report, written after nine public hearings over two years featuring 120 witnesses, presents a stark look at the barriers faced by the nearly 5 million American Indians of voting age. It also makes clear that many of them will be effectively disenfranchised if the country embraces voting by mail at the expense of in-person polling places. But even in these reduced numbers, the report notes that Native American votes are often critical in elections across the Southwest and in Alaska and the Dakotas. [Electoral inequality for Native Americans detailed in expansive study]

Says Seamans, “the trust in Indian Country of their ballots being counted, without a personal visit to the polling place…that trust doesn’t exist.”https://t.co/gKC8FnnXSU

In solidarity & compassion we mourn black & brown lives lost to police violence. As Native people fighting for justice, we understand the sorrow & anger of losing brothers/sisters to targeted violence. We must stamp out the systemic racism our nation was built on. pic.twitter.com/uKXriWipC2
— NARF (@NDNrights) June 2, 2020

Email ThisBlogThis!Share to TwitterShare to FacebookShare to Pinterest
piled in tribes, us politics