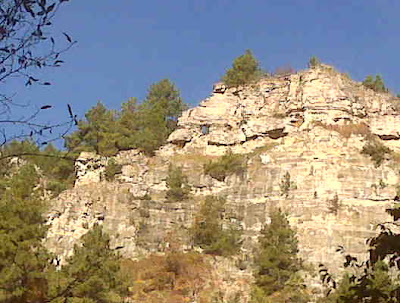 Homestake Mining Company dumped cyanide and other hazardous substances into Whitewood Creek for a hundred years so the waterway was named a Superfund site in 1981 but before selling to Canadian miner Barrick, Homestake restored some of it in 1994 and the stream was taken off the Superfund list in 1996. With help from former Homestake land manager now Sturgis real estate broker, Denny McKay, former US Senator Tom Daschle sold out the people of South Dakota and the tribal nations trapped within its borders by drafting legislation holding Barrick harmless in Whitewood Canyon. How Whitewood's water supply is safe for human consumption remains a mystery.

Actor Kevin Costner bought this parcel after the success of Dances With Wolves but was ostracized afterwards by the tribal nations signatory to the Fort Laramie Treaty. It has been known as the Un-Dunbar property ever since. This reporter has been in Deadwood Texas hold 'em games where now-deceased South Dakota Governor Walter Dale Miller and Costner were also playing.


In 1994, Costner purchased a 240-acre parcel of land, located in Spearfish Canyon, from Homestake Mining Company and traded it to the U.S. Forest Service for the 900 acres lying east of the Preacher Smith Monument, which became the Dunbar property. The trade was finalized in 1996. The 687 acres purchased by Preacher Smith LLC is part of the original traded property. [Black Hills Pioneer]

ip photo: window rock in Whitewood Canyon on the Dunbar property border with Herb's former parcel.
Posted by larry kurtz at 5:17:00 AM