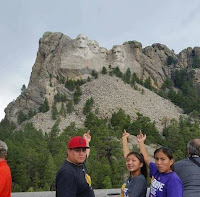 South Dakota, Montana, Arizona and New Mexico are at the bottom of a list of Kids Count results just published by the Annie E. Casey Foundation. If 1000 is perfect South Dakota comes in dead last with a score of 220. The average score for the United States is a dismal 413 although African American kids fare even worse.

Montana is at least doing something about American Indian dropout rates. Great Falls Public Schools has developed an immersion program that includes a bison hunt.


The students like immersion school so much that several asked to continue it for three weeks over the summer. Antonio, who before the program was using drugs and dropped out of school, was one of the students who did credit recovery over the three-week summer program. [Great Falls Tribune]

Wind Cave National Park in South Dakota is sending some genetically pure bison to Arizona to build a new herd there.

More than 5 million children in America are separated from a parent because of a prison sentence. Eight percent of South Dakota's kids or about 17,000 children are affected by the state's repressive law enforcement industry. Exacerbating prison population and hopelessness, personal income in South Dakota has plummeted under Republican Governor Denny Daugaard according to the Pew Charitable Trusts. The state is addicted to gambling creating staggering homelessness and despair. Rapid City and Pennington County brag about their Native mass incarcerations.

In South Dakota white people steal money slated for American Indian education and murder their families when the jig is up then place a complicit attorney general at the head of the investigation. A so-called "South Dakota Department of Tribal Relations" led by earth haters plots new ways to take advantage of and siphon resources from the nine tribal nations trapped in the red moocher state.

Another oil pipeline opponent uses the "necessity defense" -- so what is it, exactly? @NicholsonBlake @skarnowski https://t.co/EDlNqB7fWy
— Blake Nicholson (@NicholsonBlake) October 24, 2017