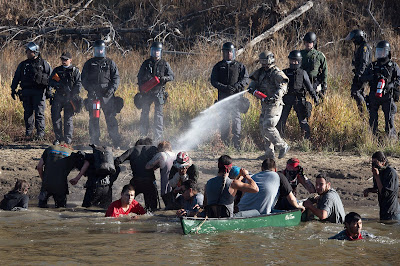 The Trump Organization blew off earth hater Burgum's request for a "major disaster declaration" to help cover some of the estimated $38 million gift to the polizei who busted heads and chilled the civil rights of water protectors trying to stop the Dakota Excess pipeline. Although Burgum was notified that the request was denied the governor's office didn't announce the snub until reporters asked about it much later. Mercenaries and National Guard troops brutalized many of the thousands of demonstrators camped on federal land near Cannon Ball where some 761 people were arrested between early August, 2016 and late February, 2017. Trump apparatchiks even referred to the American Indians and their compatriots as jihadists and insurgents.

North and South Dakota are in the cross hairs. In the US, where genocide, sovereignty rights, culture, language resurgence and growing capital resources from burgeoning black markets are building alternatives to hopelessness, suicide, and repression in Indian Country where deaths from firearm violence are higher than in any ethnic group.

The emergence of warrior societies has unified young people in North America's tribal regions. Movements are growing from the Mohawk Nation in Quebec and New York to the Lakota strongholds in South Dakota, among the descendants of the Arapaho in the Mountain West, south to the Navajo Nation and into the border regions of the Tohono O'odham.

"We want to educate people about why we are standing up for the water and for the land,” says @ChaseIronEyes. “It's not just because we're DNA-driven to do it because of who we are as Indigenous peoples who originate in this hemisphere." #NoDAPL
https://t.co/uYtAv34Jrv
— Lakota Law Project 🔺 (@lakotalaw) August 22, 2019

Email ThisBlogThis!Share to TwitterShare to FacebookShare to Pinterest
piled in red state failure, tribes, us politics

"The document points to an uptick in “sabotage attacks” conducted by anarchist extremists, environmental rights and animal rights extremists against the Dakota Access pipeline in 2016 at the height of the pipeline protest. Nearly 800 activists have been tried on a variety of North Dakota state charges, in relation to the pipeline protests, according to Water Protector Legal Collective, a legal support organization. This activity was met with heavy law enforcement presence, FBI and DHS surveillance, and aggressive military style tactics deployed by pipeline security contractors." Revealed: US listed climate activist group as ‘extremists’ alongside mass killers