Sturgis proves it's the worst town in South Dakota 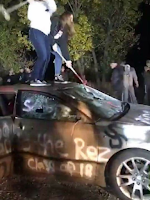 A South Dakota school board has voted unanimously to cancel homecoming activities that would have featured a football game between the Sturgis Scoopers and the Pine Ridge Thorpes after a car bearing hate speech and a symbol painted on it that some said resembled a swastika was smashed by Sturgis students.

After numerous racially-charged episodes at the Rushmore Plaza Civic Center in Rapid City the President of the Oglala Lakota Nation came under intense pressure to urge organizers of the Lakota Nation Invitational to move that event.

While incidents like the one in Sturgis are not uncommon in South Dakota white nationalist incitements have intensified after Russia helped Donald Trump steal the 2016 presidential election.


Interior Secretary Ryan Zinke says that if Confederate monuments are taken down, there’s no telling how far America might go —Native Americans could call for the removal of statues commemorating leaders who orchestrated violence against their ancestors. [Huffington Post]

The United States was founded on the backs of slaves as systematic genocide became a way of life for white christians quoting scripture as they slaughtered their fellow humans. After colonizers realized enslaved American Indians had no resistance to diseases brought from the Old World, Africans were imported to do the dirty work.

US Presidents Andrew Jackson and Martin Van Buren drove thousands from their lands and to their deaths over the Trail of Tears yet Rapid City brazenly displays their likenesses in conspicuous locations downtown.

South Dakota is home to numerous sculptures that idolize genocide visited upon American Indians. Mount Rushmore is the state's premier example of racist ideology. Its sculptor was a member of the Ku Klux Klan.

Sturgis is home to Fort Meade: one of the last outposts supporting the US Army's war against Native forces.

In a June poll hosted by this blog readers voted Sturgis "worst town in South Dakota."

Right to life? Only if you're white in Trump's America.
Posted by larry kurtz at 9:03:00 AM