American football is a tool of fascism 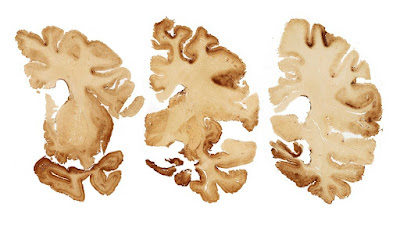 A study recently published in the Journal of the American Medical Association found 110 out of 111 brains of those who played in the NFL had chronic traumatic encephalopathy (CTE).


In the study, researchers examined the brains of 202 deceased former football players at all levels. Nearly 88 percent of all the brains, 177, had CTE. Three of 14 who had played only in high school had CTE, 48 of 53 college players, 9 of 14 semiprofessional players, and 7 of 8 Canadian Football League players. [NPR]

A University of South Dakota coach retired ahead of his sport's descent into the dustbin of history: Sioux Falls Argus Leader.


Dr. Steven Miles said an outright ban on youth football would be unrealistic. But he is among the first to recommend removing football from schools, where the pressure of school spirit or being the only kid big enough to play nose guard can rope players into a sport in which 5 percent to 20 percent of players suffer concussions each season. Miles, who has studied war crimes and torture, is surprised he hasn’t received more criticism, considering how Friday night varsity games are embedded in American culture.

Cannabis has been shown to be an effective palliative for those suffering the effects of CTE.

The only difference between American football and Roman gladiators is the losing team isn't fed to the lions.
Posted by larry kurtz at 6:37:00 AM

Email ThisBlogThis!Share to TwitterShare to FacebookShare to Pinterest
piled in cannabis, public radio