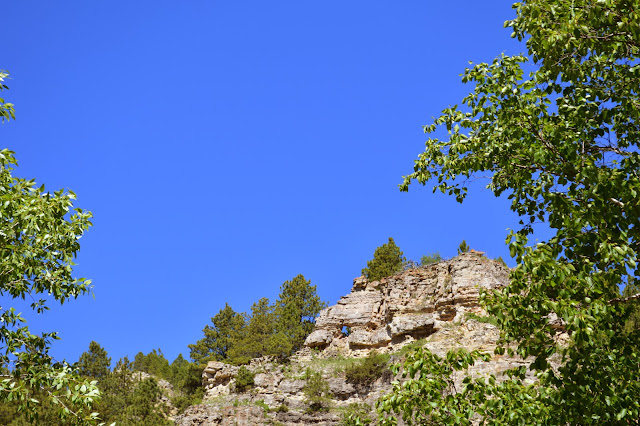 Lawrence County is known to have been inhabited by humans for at least 12,000 years before white Republicans besmirched it then turned it into the Nazi enclave and cultural wasteland it is today. Deadwood gambling was legalized with a promise to preserve all the history in the Gulch hence archaeologists still unearth Chinese opium pipes there.
In 1994 after the success of Dances With Wolves actor Kevin Costner purchased a 240-acre parcel in Spearditch Canyon from Homestake Mining Company and traded it to the US Forest Service for 900 acres just north of Deadwood and east of the Preacher Smith Monument some of it straddling Whitewood Creek. Costner was ostracized afterwards by the tribal nations signatory to the Fort Laramie Treaty so he funded Tatanka: Story of the Bison, home to several magnificent bronze sculptures.
Homestake dumped cyanide and other toxins into Whitewood Creek for a hundred years so the waterway was named a Superfund site in 1981. And, before selling to Canadian miner Barrick, Homestake and Costner restored some of it in 1994 and the stream was taken off the Superfund list in 1996 when the deal with Costner was settled. It was euphemistically known to locals as the Un-Dunbar property until Costner sold it last year.
How the water is even drinkable downstream in the town of Whitewood remains a mystery as mill slag and mine tailings still litter the creek into the Belle Fourche River, the Missouri and even to where the plume of heavy metal oxides can be detected in the Gulf of Mexico.
But, with help from former HMC land manager, now Sturgis real estate broker, Denny McKay former US Senator Tom Daschle sold out the people of South Dakota and the tribal nations trapped within its borders by drafting legislation holding Barrick harmless for all of it.
The property has since been annexed by the City of Deadwood.

Monday, the Deadwood City Commission approved a project plan for and resolution to create Tax Increment Finance District (TIF) #14, a $12.5 million TIF request that grew from an original $10.5 million in order to pave the way for an eventual turning lane into the development, estimated to cost $2 million. Commissioner Gary Todd was the sole dissenting vote on Monday’s approval. The Deadwood City Commission June 21 approved a Memorandum of Understanding (MOU) with TRD, LLC for the Preacher Smith Property, also known as The Ridge development, for a proposed annual appropriation TIF of $10.5 million. [$12.5M Preacher Smith/The Ridge TIF approved with $2M for turning lane]

ip photo: an ancient window perforates the Whitewood Canyon limestone. Click on it for a better look.
Posted by larry kurtz at 8:03:00 AM