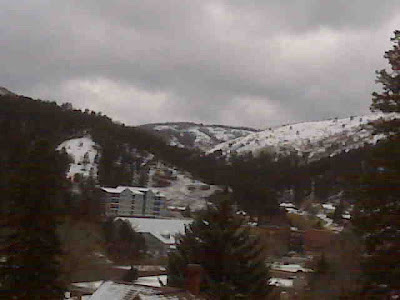 Logging out the basin for the Grizzly Gulch Tailings Disposal Project above Pluma and Deadwood in 1978 helped to launch this blogger's love of the Black Hills. Homestake Mining Company that also operated the sawmill in Spearditch, hired a local contractor who gave a farm boy and School of Mines dropout a skidder job. I got good at it, too. So good, in fact, I saved enough money to take Ray Hanson's timber crew to Pam Holliday's Purple Door in Deadwood.
But, after two salvage timber sales in the Bighorns Rich Schnarr, Ed Fuhs and this interested party went looking for work in Idaho to no avail. So, when we drove through Missoula, Montana and saw thirteen hang gliders over Mount Sentinel that was the place I knew I'd end up in 1979 when Governor Bill Janklow closed the brothels in Deadwood to divert media attention from his role in the murders of Jancita and Delphine Eagle Deer.

While prostitution was long illegal, local law enforcement in the northern Black Hills town of Deadwood had long looked past the four brothels downtown hiding in the open behind painted doors. A year earlier, Jeffrey Viken, who'd go onto become the federal court judge in Rapid City but was only then an attorney for the Department of Justice, investigated an assassination of a sitting federal judge in Texas, and traced the gun to a brothel in the northern Black Hills town of Deadwood. But while she donated to local charities like the Boy Scouts and her prostitutes purchased fancy clothing from a downtown store (and even regularly underwent health checks by the county), Holliday also became friendly with motorcycle gangs and offered a safehouse for firearms trafficking. [What finally closed Deadwood's last four brothels, including the famed Pam's Purple Door]

It took the lobbying of Lt. Governor Walter Dale Miller, Democrats Bill Walsh and Tom Blair to bring legal gaming to Deadwood to finance historic preservation; but, Republican greed has turned it into the prostituted cultural wasteland that it is today.
Now, most if not all, meth in South Dakota is trafficked by white Trump-worshiping motorcycle clubs. These hordes are essentially domestic terrorists operating with the blessings of the prison/industrial complex. The Sons of Silence, Bandidos and Hells Angels control organized crime in the Black Hills area where members have infiltrated nearly every community even operating Rapid City's Cornerstone Rescue Mission for a time as a front for their activities. Former Cornerstone director, Dan Island, build a Lawrence County mansion and together with his brother Frank built a cocaine and meth empire before their deaths.
ip photo: the Deadwood Mountain Grand from the Presidential District.

I spent the better part of 3 days in Deadwood for work. I won’t be back for pleasure anytime soon, if ever. The upside down American flag, Let’s Go Brandon & Trump 2024 t-shirts, not to mention no masks, on anyone, anywhere, made my skin crawl from arrival to departure. #hifromsd