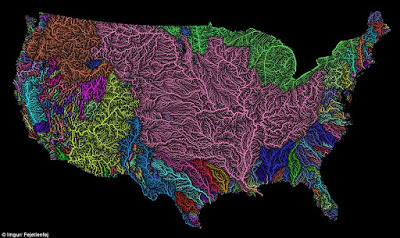 Little wonder the Big Sioux River is a sewer of biblical proportions.
South Dakota's dairies are wreaking habitat havoc all along the state's border with Minnesota and like most of the state, southwestern Minnesota and northwestern Iowa are Republican strongholds where dairies, swine units and other concentrated animal feeding operations (CAFOs) have devastated water supplies by contaminating wells with nitrates.
Now, because of environmental degradation driven by CAFOs officials with the Lewis & Clark Regional Water System (LCRWS) want to expand output from its current 45 million gallons per day to 60 million gallons per day.  Water levels in the Missouri River and its basin are at historic lows.
Contact with the Big Sioux River can cause spontaneous abortions in pregnant women but the congressional delegations from the tristate region are Republican Earth haters elected to bring bacon home to their districts while decrying socialism, big gubmint and the US Army Corps of Engineers who manage the Waters of the United States or WOTUS.
Republicanism isn't self-reliance; it's moral hazard. Instead of empowering communities to harvest snow melt and rain water rural communities continue to be dependent on politicians who exploit need so they're begging the Biden administration for more money.
Learn more at WNAX.