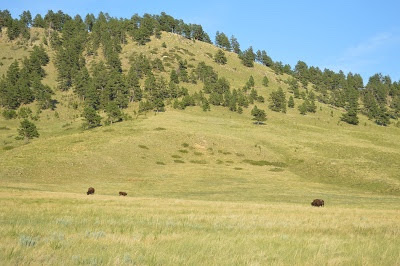 If cattle grazing is the key to preventing wildfires why is Republican ranch country still suffering near daily high or even extreme grassland fire danger indices so often even during winter?
After the Soviet Union fell Republicans began their war on the environment in 1991 substituting a new Green Scare for the old Red Scare.
Today, urban sprawl, accelerated global warming and drought are reducing productivity on the remaining grasslands of the Great Plains, writes Dr. Jeff Martin. He's the Director of Research at the Center of Excellence for Bison Studies at South Dakota State University.
Only 3 percent of the Earth's surface remains untouched by human development and a sixth mass extinction is underway. Putting the country on the path of protecting at least 30 percent of its land and 30 percent of its ocean areas by 2030 (30x30) is imperative to preserving public lands and moving the US Forest Service from the US Department of Agriculture into the Department of Interior would be just one step toward that goal.
That Republican welfare ranchers are angry about rewilding means it's the right thing to do.
In 2019 Democratic then-New Mexico Representative Deb Haaland led a House subcommittee hearing on anti-government extremism emphasizing that the violent ideologies expressed by the Bundy clan were spurred by white elected Republicans in the Mountain West. Now, under Interior Secretary Haaland the Bureau of Land Management has even hired a security specialist to outline strategies to defend federal employees and property.
Herr Trump's first Interior secretary blamed wildfires in the West on those he called “radical environmentalists” despite most acres burned occur on private ranch land in Republican counties. On the final day of Trump’s presidency his last Interior secretary even restored a grazing permit to the Hammond Ranch whose prescriptive burn escaped onto federal land. Only a tiny fraction of public lands offered by the Trump Organization to the extractive industries were even leased yet Republicans see the Biden White House as hostile to their causes especially after the Hammonds' grazing permits were again rescinded.
David Treuer was born of a Holocaust survivor and Ojibwe mother. He wrote in The Atlantic that he believes that most land held in America's national parks should be remanded to Indigenous peoples but it's my view that the land held in the Bureau of Land Management and the Forest Service should also be part of that trust.
Indigenous peoples set at least 47% of fires in the Interior West between 1776 and 1900 because smoke from cultural fire has been long-applied to control tree pests and just 150 years ago over 10 million bison would be clearing the grasses that drive large range fires but just 600,000 bison still exist in the United Snakes today.

“Climate change directly affects bison by increasing thermal stress and decreasing forage and water availability, issues that also challenge range beef cattle,” Martin says. “Indirect consequences of climate change include increasing distribution and intensity of parasites and several diseases that are known to reduce reproductive success. These stresses have been estimated to collectively reduce bison body size by 50% if global temperature warms by 4°C near the end of the 21st century.” “Currently, 90% of grasslands and 85% of bison are privately owned, which justifies the need for robust private land conservation strategies to maintain this iconic species and its grassland habitats,” Martin says. [Brookings Register]