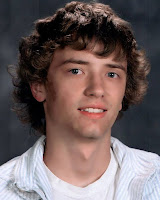 Brady Folkens of Brookings died in state custody after a botched diagnosis at the former State Treatment and Rehabilitation (STAR) Academy in a county named for a war criminal on December 21, 2013 then the State of South Dakota’s Office of Risk Management and Republican Avera lawyer, then-Lt. Governor Matt Michels helped to bury the evidence of negligent homicide.
After a public outcry the death camp was shuttered and the sprawling property put up for auction. The stigmatized site was recently sold for a fourth time at a substantially reduced price.
The state has a history of poor choices made by state employees. Fourteen year old Gina Score died after a forced run in 1999 then the state settled with Score's family for just over a $million without accepting guilt for her death.
A cynical observer might see Republican former South Dakota Governor Denny Daugaard's decision to close two state-owned boot camps as a vehicle to drive kids into the clutches of the Children's Home Society where he enjoys a financial interest.
No doubt Republican Attorney General Jason Ravnsborg is enjoying similar cover.

Dawn Van Ballegooyen and I found this interesting letter in Brady Folken’s file at Gary Thimsen’s law office at Woods, Fuller, Schultz, and Smith in Sioux Falls. Thimsen was hired to defend South Dakota authorities from liability in the death of 17-year old Brady. Notice the letter was date stamped by both the Office of Risk Management (run by Craig Ambach) and by the South Dakota Attorney General’s Office (run by then-AG Marty Jackley) – under the aegis of then-governor [Daugaard]. Proves to us that the South Dakota authorities made Brady’s cover-up a very high priority – so high that the law firm of Heideprim, et al., backed off. [Dr. Lars Aanning, Faceberg post] 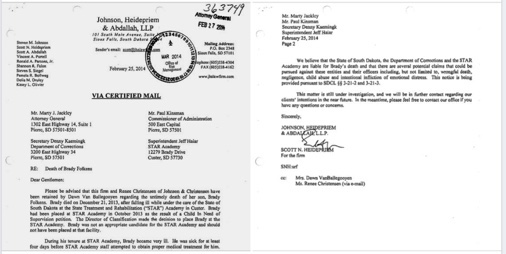