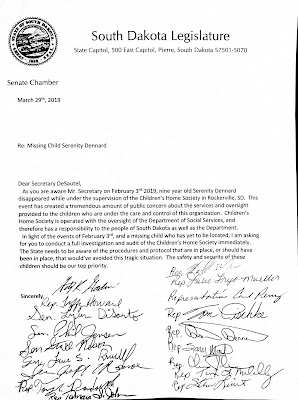 The split in the South Dakota Republican Party is being widened by a missing nine year old girl.

State Senator Lynne DiSanto has been raising awareness of the abuses committed by the Children's Home Society leading up to the disappearance of Serenity Dennard. The Children's Home Society has been under the regulatory microscope before for violations of trust. One former executive director is none other than Republican former South Dakota Governor Denny Daugaard. Mass incarceration fuels the white foster home industry: a pet project of Daugaard's wife.

The United States foster care industry supplies at least 88% of sex-trafficked children some of whom are raped for money at the annual Sturgis Rally. Billionaire Republican Denny Sanford has given millions to the Children's Home Society, just for instance.

Among other things, the October 2011 series — “Native Foster Care: Lost Children, Shattered Families” — said Native American children in South Dakota too often are placed with white families, contrary to the intent of the federal Indian Child Welfare Act. It also said the state has a financial incentive to take Native American children into state custody, that Gov. Dennis Daugaard’s work at Children’s Home Society while he was lieutenant governor was a conflict of interest, and that South Dakota’s foster care system in general has a cultural bias against Native Americans. The Coalition of Sioux Tribes for Children and Families and the Lakota People’s Law Project cited this number in a report to Congress in January. “We believe it is likely that the state consciously treats Native American foster children as an attractor of federal money,” the coalition’s report said. --Cody Winchester, Sioux Falls Argus Leader. Links added. 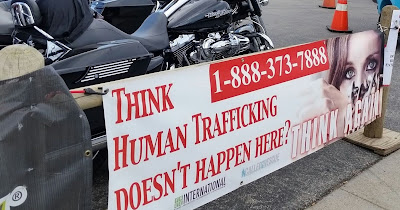 Sexual predators in Pierre have been a feature of South Dakota during the legislative session for its entire history but to Sioux Falls-area legislator, Deb Peters it's no big deal.

The Aberdeen American's editorial board is pointing fingers at other South Dakota media for lousy coverage of the Republican rape culture in Pierre. "Unsafe. Unacceptable. Hyper-masculine. Sexualized. Dirty." That's how the board and how women have described earth haters in Pierre. The South Dakota Newspaper Association, teevee stations and local media have known about Pierre's rape culture and culture of corruption for decades but simply concede to the twenty earth hater donors who run the state.

Hells Angels, Bandidos and other gangs own property in the Black Hills area to serve as bases of operation for sex and meth trafficking much of it through what appear to be legitimate businesses. Those motorcycle clubs and the South Dakota law enforcement industry use the Sturgis Rally as a sort of pyramid scheme clearinghouse. During pre-Rally meetings they exchange the names of individuals who will ultimately be targeted for arrest to place moles into the state's jails and prisons and to provide cops with an appearance of relevance. The Sturgis bacchanal is really all about male white privilege at any cost. Thanks to selective enforcement white thugs have carte blanche to commit flagrant criminal acts during the Rally. A long history of lawlessness can make the event highly virulent attracting common parasites who breed in the cesspools of human existence. Gangs of armed men with mental illnesses and addictions to meth power their way into western South Dakota every year; and, an accepted outlaw biker culture routinely traffics illicit behaviors that would otherwise be subject to legal interdiction.

Polygamy and pedophilia are apparently protected religious freedoms in South Dakota as far as Republicans are concerned. Recall the mother of earth hater state legislator and former candidate for South Dakota Attorney General, Lance Russell sold property to the Fundamentalist Church of Latter-Day Saints (FLDS) Church where minor girls are trafficked and raped. That they offered escape to Serenity is not impossible.

For about three months of the year, from September to November, the bar and restaurant transform into a completely different establishment. But increasingly it is a commercial enterprise, one that comes with a dark side: sex trafficking and pop-up strip clubs that cater to hunters here for a good time. Asked about a rumored prostitution sting at Frank Day’s last year, a representative for the state Department of Criminal Investigation issued this statement: “The DCI does a number of operations, but we do not confirm any details. The only time operation details are released is if there are arrests.” For trafficking survivor advocates like Heth, of the Pathfinder Center, pheasant season isn’t the tradition-tinged seasonal activity that harms only birds. Trafficking ensnares South Dakota women as well. Native American women are heavily targeted. Nothing to see here. [Hunting season’s underbelly: Stripping, sex trafficking and small towns looking the other way]

But, a red moocher state like South Dakota is powered by sin: video lootery, a loan shark industry that preys on the least fortunate and a too-big-to-jail banking racket fill in the gaps created by lobbyists who enjoy the protection of single-party tyranny. Desperate to pay off those who benefit the entrenched Republican establishment criminals always have a champion sitting as attorney general. Now, the chemical toilet and permanent disaster area that is South Dakota has elected a governor who not only slept her way to the top she has never supported the Violence Against Women Act.

Despite lies from the South Dakota Republican Party video lootery, payday loan sharks, domestic violence and homelessness are inextricably linked putting children at risk to more catastrophic consequences far more often than has happened in states that have legalized or lessened penalties for casual use of cannabis. Fact is: South Dakota is far closer to legalizing prostitution than it is to cannabis reform.

The reasoning is hardly mysterious: it's all about the money policing for profit, sex trafficking, hunting and subsidized grazing bring to the South Dakota Republican Party destroying lives, depleting watersheds and smothering habitat under single-party rule.

Serenity’s adopted grandmother Barb Dennard has been a player in Sturgis real estate for decades. Anyone who believes this is all just coincidence is delusional.

Since South Dakota routinely falsifies lab records that means the state will pin Serenity's death on a mountain lion so Game, Fish and Plunder will just go out and kill one then close the case!
Posted by larry kurtz at 1:35:00 PM

"Summary is that outpatient therapy wasn't enough to treat her behavioral issues stemming from the trauma of being taken away from her birth parents and then being placed in 12 foster families before being adopted. The parents thought she needed inpatient/more intensive therapy for her own well being. These types of places require serious intake applications. You can't just drop someone off." Arielle Zionts, reporter at the Rapid City Journal