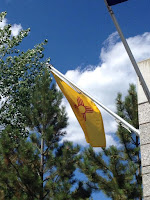 New Mexico's flag has been named the coolest in America. This image was captured at Mount Rushmore National Monument in the occupied Black Hills.


At the center of the debate is a 140-page bill that would legalize, tax and regulate the recreational use of marijuana for adults. The state now allows cannabis only for medical purposes. The proposal, House Bill 356, cleared its first committee Saturday on a 5-2 vote along party lines, with Democrats in support. “Prohibition simply does not work,” Democratic Rep. Antonio “Moe” Maestas of Albuquerque said, “and the country is coming to the realization of that.” As it stands now, the proposal would include:

⋄ Imposing taxes of up to 19 percent on recreational marijuana sales. Annual tax revenue would be in the neighborhood of $56 million, legislative analysts said. The money would go to health, law enforcement and research programs, in addition to city and county governments.

⋄ Allowing cities and counties to opt out of allowing commercial sales of recreational cannabis.

Speaker of the New Mexico House Brian Egolf not only supports legalization for all adults he serves as legal counsel for the state's therapeutic cannabis leader, Ultra Health. Calling itself "New Mexico's No. 1 cannabis company" Big Dope Ultra Health has broken ground in Clayton near the borders with Texas and Oklahoma. Keeping the industry from the clutches of a monopoly is expected to be contentious.

My preference is craft growers would also be marketers like vineyards and brewers subject to state inspections. The revenue debate needs to be done in committee in concert with tribal officials interested in forging compacts with the state and acknowledgement the future of value-added cannabis is grown outdoors, organic, geothermally heated indoors and powered by off-grid sources of electricity.

Called it. "Duke Rodriguez, who heads Ultra Health, the biggest medical cannabis company in the state, also has problems with the bill but commended the Republican sponsors. “These guys are really sticking their necks out,” he said. “I’m impressed that three Republicans have acknowledged the need for legalization.”

The major objection Rodriguez has to SB 577 is the part that would have the state run retail outlets for nonmedical sales. “The state has problems sending [Medical Cannabis Program] cards on time,” he said. “Are they really ready to build and open a couple of hundred stores across the state?”

Rodriguez said that he and the other licensed producers in the state are “trailblazers” who have built in the course of a decade a $100 million-a-year industry. “It’s not fair to exclude medical producers from trying to profit from recreational cannabis sales,” he said." [GOP senator’s bill calls for state-run pot shops]

HB356 has passed from committee and onto the New Mexico House floor. One of the lawyers drafting it is a Lyman (South Dakota) High School grad, Trace Rabern.

Thank you for the tweet! But many very sharp minds worked tirelessly through drafts of this bill, which is uniquely comprehensive and well-supported in science. We can be quite proud of it.