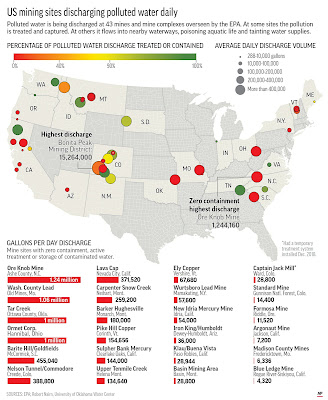 Much to the frustration of locals, the US Environmental Protection Agency moved most of the contaminated soil from above Rimini, Montana to a mine in upper Basin Creek where it was encapsulated.


The community of Rimini was added to the Superfund list in 1999. Contaminated soil in residents’ yards was replaced, and the EPA has provided bottled water for a decade. But polluted water still pours from the mines and into Upper Tenmile Creek. Estimates of the number of such abandoned mine sites range from 161,000 in 12 western states to as many as 500,000 nationwide. At least 33,000 have degraded the environment, according to the Government Accountability Office, and thousands more are discovered every year. In 2017, the EPA proposed requiring companies still operating mines to post cleanup bonds or offer other financial assurances so taxpayers don’t end up footing cleanup bills. The Trump administration halted the rule, but environmental groups are scheduled to appear in federal court next month in a lawsuit that seeks to revive it. [US mining sites dump 50M gallons of fouled wastewater daily]

New Mexico's Democrats in congress and the Navajo Nation just secured $4 million to fund water quality monitoring of the San Juan and Animas Rivers contaminated in the 2105 Gold King Mine spill.

Recall that in 2011 a portion of the highly toxic slag pile owned by Canadian miner Barrick collapsed into Whitewood Creek below Deadwood. The force of the cave-in caused ejecta to partially block the adjacent roadway and dammed the creek for approximately thirty feet. 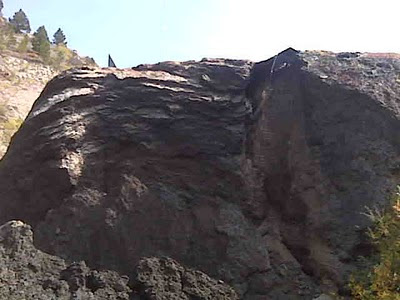 After an interested party reported the incident to the Lawrence County Sheriffs Department Stan Michals from South Dakota Game, Fish and Plunder called me and said he had only just heard of the incident from my voicemail to him. He said the Department of Ecocide and Natural Ruination dispatched an inspector and GFP would act on its recommendations. DENR's words to Michals were that the metals in the slag are "not very mobile" and "they don't immediately impact the fishery." The creek ultimately pushed through the dam spewing slag down the streambed.

The Board of Minerals and Environment is an arm of the South Dakota Republican Party that ceded regulatory authority to EPA for uranium mining after the state's moocher state legislature realized there is no competent oversight from state agencies.

Acknowledging there will always be acid mine drainage the board recently met in Pierre to announce its plans to continue the war on the Black Hills Gilt Edge Superfund site as EPA becomes a tool of the extraction industry.


Because rail lines in Butte and Anaconda were built using slag – waste from smelting – the ground underneath Mitchell Stadium could contain arsenic and lead contamination not previously discovered. EPA declared Anaconda a Superfund site in 1983 due to more than 100 years of copper smelting. Despite the fact that the sandbox at Benny Goodman Park came back with arsenic levels at 725 parts per million and lead at 817 parts per million in 2017, EPA said last year that the sandbox was still “safe.” [Montana Standard] 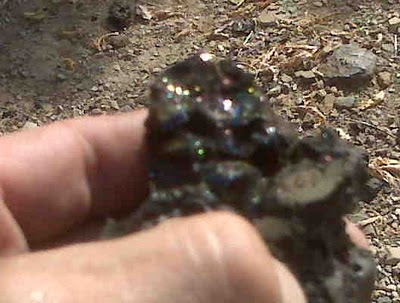 If the slag in Whitewood Creek was harmless or benign it would be added as aggregate to concrete destined for highway repairs.

Nearly a century of residue from the Black Hills Mining District affects millions of cubic yards of riparian habitat along the Missouri River all the way to the Gulf of Mexico even after the Oahe Dam was completed in 1962. The soils of the Belle Fourche and Cheyenne Rivers are inculcated with arsenic at levels that have killed cattle while catfish and most other organisms cope with lethal levels of mercury.

Tintina is a Canadian miner like Barrick and Mineral Mountain are.


Environmental groups and anglers have lined up in opposition to the mine, arguing that it could harm water quality in Sheep Creek, an important spawning stream for Smith River trout. Tintina maintains that their operation will use the best mining techniques and won’t harm either stream. [Bozeman Daily Chronicle]

On the east side of the Continental Divide Barrick also operates the Golden Sunlight Mine near Whitehall, Montana. Effluent from that mine goes into the Jefferson River also a tributary of the Missouri and much of it lies in repose within Canyon Ferry Reservoir.

Email ThisBlogThis!Share to TwitterShare to FacebookShare to Pinterest
piled in Earth, I-25, montana, sd politics, us politics

"Pegasus Gold Corp., a Canadian company that owned that mine and several others in the state, went bankrupt and folded 20 years ago. That left a legacy of water pollution and a cleanup bill nearing $100 million — with no end in sight. These abandoned mines, as well as modern mines that hold inadequate bonds, can become the responsibility of the taxpayer-funded Superfund program. EPA figures show it could take an additional $50 billion to reclaim the hardrock operations that were abandoned in the West prior to the rules governing mines like Zortman-Landusky in Montana." Companies polluted Western waters. Taxpayers are picking up the tab.