Today's intersection: a toilet paper shortage and the petrochemical industry.

Downed power lines are suspected as cause of at least three New Mexico fires as was the case for the Grizzly Gulch Fire outside Deadwood. Once again, Ponderosa pine is the primary fuel.

These aren't natural forests where wildland fires are raging: they're largely second-growth pine monocultures allowed to overrun aquifer recharges after a century of fire suppression. Roads not built for logging because they're erosion menaces are nevertheless carved into hillsides willy-nilly to fight wildfires. 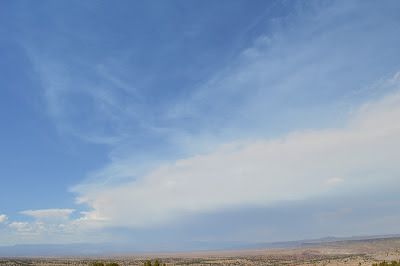 Pyrocumulus over the Thompson Ridge Fire from Baja Waldo.


Carbon dioxide emissions fell last year to their lowest point since 1994, according to the Department of Energy. Methane is up to 105 times more potent than carbon dioxide as a greenhouse gas on a 20-year timescale.


According to a new report from Navigant Research, global installed biomass power capacity will grow gradually over the remainder of this decade, from 58.6 GW in 2013 to 82 GW in 2020, under a conservative forecast scenario. Under a more aggressive scenario, installed capacity could reach 128.5 GW in 2020, the study concludes.

The electric power grid is an antiquated, vulnerable system and there are hundreds of millions of acres of dead or dying pine. Environmental contaminants from wildfires are circling the globe at increasing rates: how sad the intersection has to result in a collision.

So, BP and their corporate buddies have ruined at least 2000 miles of shoreline and turned the Gulf of Mexico into a massive Dead Zone in part to make polyvinylchloride grocery bags as the lodgepole and ponderosa pine used to make paper infest the Rocky Mountain Complex at the expense of healthy biomes.

Raven Industries in Sioux Falls has lost stock momentum manufacturing airships for surveillance instead of diversifying into ships for timber harvest.

A Montana company is part of an Arizona biofuels initiative intended to avert catastrophe:


Loggers, local officials, environmentalists and researchers spent years hammering out a consensus on the need to thin millions of trees smaller than 16 inches in diameter. The loggers and the environmentalists worked out long-standing conflicts when they agreed that commercial logging operations could make a profit even if they left most of the larger trees in place. [Pete Aleshire, Payson Roundup]

From a piece written by Steven Powell describing research being conducted at the University of South Carolina:


Hydrocarbon-rich starting materials, whether from petroleum or tree resin, can be converted into various forms of what are commonly termed “plastics” through polymerization. With petroleum derivatives, scientists have invested more than a hundred years of research into refining the polymer chemistry involved, and their success in that endeavor is evident in the range of plastics now part of common parlance, such as Plexiglas, polycarbonate and PVC.


Dan Williams, a spokesman for New Mexico Game and Fish, expects it will be a tough year for bears, too. "Without water, there are less grasses and forbs that come out in the springtime that bears mostly subsist on until the acorns, nuts and berries come on later," he says. "Last year, we had a pretty good spring and early summer. There was plenty to eat up high. That resulted in a pretty good crop of cubs. This year, they're kind of in trouble. The grasses and forbs are simply not there. So they're having to come down to look for food elsewhere. It's likely to get worse later on."


An unusually stormy April built up the snowpack in most of northern Colorado to just about average. In the southern part of the state, however, snowpack in the Rio Grande, Dolores, Animas, San Miguel and San Juan basins sat just above 40 percent of average at the start of May. [Carswell, The Goat Blog, HCN]

People in the path of Colorado's Black Forest Fire: sue your landlord, real estate broker or developer if a disclaimer describing the risks of renting or building in or near a dense Ponderosa pine forest was not part of your contract. People building in or near these hazards should be denied homeowners insurance.

Weaponized wildfire (known politically as pyro-terrorism), not ruled out in the Waldo Canyon Fire, is now suspected on the Black Forest Fire and cheatgrass is one of the fuels.

From NPR's the Two-Way:


"Three red lights in a triangle ... spotted hovering in the sky" over Lafayette, Colo., on Monday have folks there talking about aliens and UFOs, Boulder's Daily Camera says. Joe Valadez, 47, also posted a video to YouTube of the lights in the sky. Some of the commenters on Valadez's video were skeptical. One user, Lonnie Sexton, 33, wrote: "I want proof as bad as the next guy, but these are just hot air candle balloons folks."

The cause of the Indian Gulch Fire remains under investigation. Maybe they should look here:

Looks like others have come to many of the same conclusions. Brad Plumer writes in a Washington Post piece how the feds encourage and could fix what amounts to sprawl:


The paper [pdf] lists a number of ways to shift these incentives. Congress could pare back the mortgage-interest deduction for homes built in vulnerable fire zones. Or the federal government could work with states to be more cautious about where they build (or at least tighten building codes in fire-prone areas). Or Congress could flatly require homeowners in these areas to buy federal fire insurance. The broader point is that it doesn’t make sense to encourage people to live in fire zones and then spend billions protecting them.

Colorado Springs is a military town: why would it not look like a soft target?

Email ThisBlogThis!Share to TwitterShare to FacebookShare to Pinterest
piled in Earth, I-25, manifesto

What is weaponized wildfire, and where do you get a statement like that, with no attribution, no backup?

As for denying homeowners' insurance, don't be ridiculous. Ponderosa forests burn about once every 50-100 years. Maybe a fire is due now, but you can't deny insurance on the chance someone's home might be the one affected. People still get insurance in tornado zones (which those in Colorado Springs are not far from), where hurricanes strike, etc. Many people bought or built before these fires were so common. I lived in the foothills for 30 years and never had any issues till the last couple of years. There was an occasional fire, but no one really worried about it. I was just in Lake Tahoe and even though fire danger there was said to be high, no one had done a thing to mitigate anything. It's just not part of the culture. Trees coming out of decks, branches down everywhere, underbrush... I asked a couple of questions about mitigation and people were shocked to even think about it. So stop pointing fingers at Colorado homeowners and expecting them to change their whole lives because of fire. These fires come right into cities like Colorado Springs, so obviously, living in the mountains has nothing to do with it. Friends in downtown Boulder have been evacuated more times than I have. Glenwood Springs nearly burned because of a scrub fire some years ago. Grassfires in Texas destroyed a lot of property and livestock, and nearly took an entire town last summer in Colorado. So living NOT in a fire zone is no real protection.

Should all of the California coast move out of the earthquake zone?

The author of this forum coined the phrase weaponized wildfire: DHS calls it pyroterrorism. Colorado has burned nearly a thousand homes in the last three years. Earthquakes are not yet preventable but wildfires there can be prevented, too.