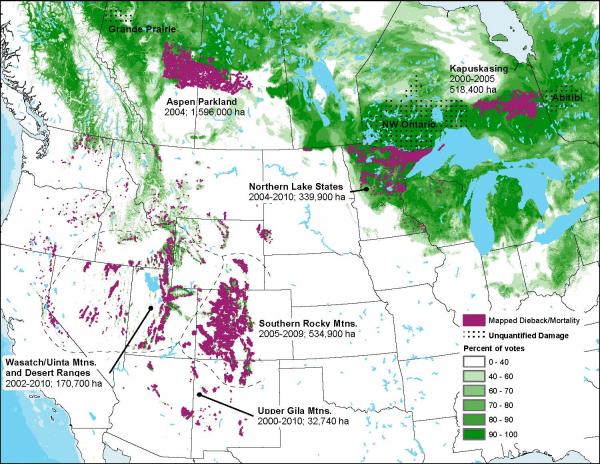 Update, 24 March, 0751 MDT: researchers trying to find a correlation between wildfires and beetle killed areas in lodgepole pine did not find one.


Distribution of aspen decline mapped during 2000–2010, the decline is shown in purple. Aspen’s climatic niche during 1961–1990 is shown in green. The dashed lines show regions of decline where demarcation is unclear. Many areas were not surveyed, so additional symptomatic areas exist that were not mapped. Credit James Worrall / U.S. Forest Service

Lodgepole pine and Douglas Fir have been extirpated from the Black Hills for nearly a century: the oldest aspen was virtually logged out during European settlement; yet, tiny stands of old-growth ponderosa pine can still be found in the Hills.

Ponderosa pine contains a much higher level of volatile organic compounds (VOCs) than many other cone-bearing trees and tends to be more explosive in wildfire conditions especially when under drought stress. Beetle-affected trees are pockmarked with 'pitchouts' that burst into flames during wildfires and torch more readily.

Bark Beetles Are Decimating Our Forests. That Might Actually Be a Good Thing.


On Friday, in the online journal “Forests,” University of Montana pine-beetle biologist Diana Six and two University of California-Berkeley policy experts published a review of the scientific evidence to date on whether forest manipulation is effective at preventing pine-beetle outbreaks. The answer is generally “No.” The paper concludes that weakening environmental laws to combat beetle outbreaks is unjustified given the high financial cost of continual treatment, the negative impacts such treatment can have on other values of the forest, and the possibility that trying to control beetles now could hurt forests as they try to survive climate change in the future. [Laura Lundquist, Research survey does not support logging as beetle outbreak remedy, Bozeman Daily Chronicle]


“By our estimates (the population) was well below 100 animals,” said John Kanta, regional wildlife manager for the GF&P. “We were down around 60-70 mountain goats just prior to closing the [2007] season.” The cause of population decline was and remains largely unknown; however, there are some suspected causes. The first comes from a loss of habitat.

Kanta said that in 2007 the rapid increase in pine beetle infestation killed thousands of acres of trees leading to a more open canopy and better habitat for the animals.[Mark Watson]

Let's see: beetles bad but beetles good. Got it.


From Oct. 1, 2012, to Sept. 30, 2013, Lawrence County cut 48,000 non-commercial trees on Black Hills National Forest land. Meade County cut 6,214 trees on federal land while Pennington County cut 3,217 during that same period. According to the report criticizing Meade County’s management of the cut and chunk project, John Ball, a South Dakota State University Extension forestry specialist, claims the majority of the trees marked and cut were not infested, meaning within treated stands the crews caused more tree mortality than the beetles. Commissioner Alan Aker, who supervised the Meade County cut and chunk program, says the state ag department’s report is false. Aker, who also owns Aker Woods Company that was contracted to mark and cut infested trees, says that less than three percent of trees cut had no sign of infestation. According to Aker, those trees were cut to ensure worker safety. South Dakota spent $1.9 million in fiscal year 2012 in the ongoing fight against mountain pine beetles. An additional $2.4 million was spent in fiscal year 2013. The governor’s office anticipates appropriating $3.7 million, in fiscal year 2014. [Francie Ganje, KBHB Radio]

A university extension specialist working for the state questioning a Republican former legislator about contracts to remove dead trees on federal ground: priceless.


Sen. John Thune and U.S. Rep. Kristi Noem’s offices announced this week that $1.5 million will be added to the Black Hills National Forest’s 2014 budget. The Forest Service said the money will be used to remove additional bug-infested trees. A recent report by the South Dakota state forester alleged that loggers were cutting healthy trees along with the bug-infested ones. [Meredith Colias, Rapid City Journal]


The moisture in the Black Hills snowpack is not only better than last year, it beats the 30-year average according to the USDA's Natural Resources Conservation Service. When compared to the 30-year moisture average, all but one of the course readings are anywhere from 107 percent to 193 percent. [Jack Siebold, KOTA teevee]

Paha Sapa ("hills that are black" may have been a reference to burnt timber instead of the accepted, "seen from a distance") hasn’t been a natural forest since 1863 when a nearly Hills-wide fire (possibly set by humans hoping to clear pine), opened grazing for distinct historic ungulates.

Brown and Sieg have noted at least 77 instances of human-induced wildfire on the pre-settlement Hills.

You just can't make up this crap.

Or what: get sued into bankruptcy for moving the insects in timber more efficiently with logging trucks along public highways and Forest Service roads to the mill for the last 50+ years? Now 3 mills that i know of, operate a virtual monopoly and lobby heavily in Pierre to pump the handle(s).

Fuck these people...too! The bug is removing one of the biggest threats to the Black Hills water supply by killing one remnant of anthropogenic interference in former bison and wapiti habitat: Ponderosa pine infestation.

Preserve the legacy pine by saving them from the Neimans, clear cut without building new roads especially where doghair chokes aspen, birch or hazelnut, convert it to biodiesel, and burn, baby, burn.