Lalley: SD Dems don't have a prayer without hope and change 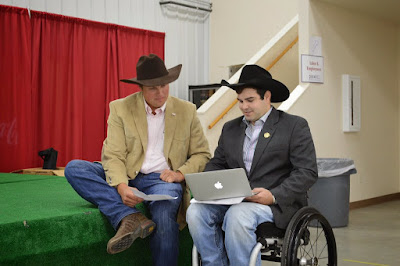 With the Argus Leader, KSOO Radio and every other media outlet in my home state in the tank for the South Dakota Republican Party Patrick Lalley's job might indeed be better held by someone from Iraq but unfortunately Tariq Aziz is no longer available.


To be blunt, the Democrats introduced Billie Sutton to the state by putting him up on a barren stage in the middle West River ranch country. But it doesn’t look forward. Democrats haven’t held the governorship since Dick Kneip in the mid-70s. They need to change and refocus the core issues they are built upon. They need to find some way to attract middle class households from Harrisburg to Hartford to Brandon. [Patrick Lalley]

Exactly, Pat. Sutton is a fart in a haboob who bought Susan Wismer's mailing list now bombing my inbox begging for money. The South Dakota Democratic Party apparently learned nothing from the failure of a cowboy running for Montana's At-large congressional seat.

Unless Sutton embraces passing a corporate income tax, reducing the number of SD counties to 25, turning Dakota State University into a community college, ending video lootery and adopting my cannabis template he is just wheeling into the fray as an SDGOP-lite asterisk. No SD Dem gets a dime from me until the county chairs are filled.

Having said all that, a few leaks about Kristi Noem's dalliances could make the difference in the earth hater primary where Marty Jackley is out-financed by a factor of ten.

Primaries are expensive and allow far too much mischief: since turnout is so pathetic especially during midterms the drain-circling South Dakota Democratic Party should end them and choose candidates at the state conventions.

As progressive activist Chaz Jewett said, "Again we are given a shiny penny by the South Dakota Democratic Party. When is enough enough? Options are wanted."

In the above ip photo Heck on Wheels Billie Sutton and another ineffectual legislator review the script for a skit during the 2014 Democratic SD State Convention.
Posted by larry kurtz at 7:11:00 AM