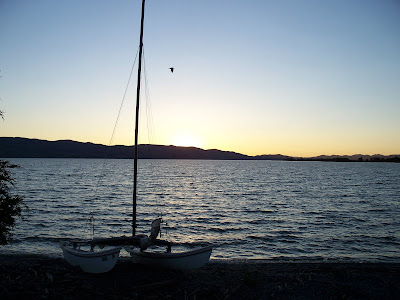 Only seven readers of interested party believe South Dakota has any good towns at all but Yankton won anyway.


"It’s a perennial favorite," said Ben Wells, the media coordinator with the Hobie Class Association, which will hold its Hobie 16/20 North American Championships at Lewis & Clark Lake this week. Yankton has previously hosted Hobie Cat national events (in 2008 and 2013), but this particular championship is on a grander scale, according to Wells. "This will be one of the larger events we’ve hosted," Wells said. Wells said there will also be a couple of teams from Cuba. [Yankton Press & Dakotan]

Fugitive Lyle Jeffs of FLDS fame was just apprehended in Yankton after pawn shop operators dropped a dime on him.

Angostura Reservoir on the Cheyenne River near Hot Springs has hosted regattas sponsored by Hobie Fleet 198 and Spearditch isn't that far from the Belle Fourche Reservoir where sailing can mean flying boats right out of the water.

One of my favorite experiences at Orman Dam was a 1990 mushroom-inspired sail at midnight under a full moon with 20 knot winds and hundred degree temps with Jack Kreitzer and Bob McNeill helping to hold the boat down as it reached for another plane.

Yes, this blogger still has a Hobie 16 but sailing in New Mexico means long road trips. Elephant Butte is not very sail-friendly and Navajo is too far. Nearby Cochiti Reservoir at the confluence of the Rio Grande and Santa Fe River is a radioactive sewer.

Above ip photo is from 2011 taken at Canyon Ferry Reservoir near Helena, Montana not far from the headwaters of the Missouri River.
Posted by larry kurtz at 6:39:00 AM

Email ThisBlogThis!Share to TwitterShare to FacebookShare to Pinterest
piled in I-25, ip, pix, sd politics