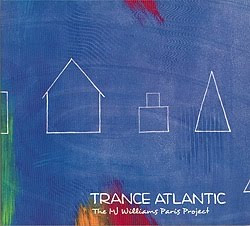 From Mariss McTucker and Lively Times:

Basin resident and beloved jazz maven MJ Williams, she of the be-bop vocal bent and stellar trombone licks, spends time in France each year, performing at clubs for jazz-crazy Europeans. As the recipient of a grant from Helena’s Myrna Loy Center, she was able to record this mostly instrumental CD of original music with friends who are world-renowned jazz pros and composers in their own right.

The album features Williams on voice and trombone, Amy Gamlen, saxophones; Jobic LeMasson, piano; Peter Giron, bass; and John Betsch, drums – masters of the jazz vocabulary, all. It was recorded April 11-12, 2009, at Bopcity in Paris; engineered by Max Jesiom and mixed and mastered by Ken Nelson at Cottage Recording in Helena.

The album starts off with a bossa nova beat on Williams’s “In the World Again.” It crackles and dances, with Williams in fine voice. She sings scat, while Gamlen too-wees on sax; piano and percussion bubble underneath.

“Really,” by Gamlen, finds Williams and Gamlen trading honking lead lines; the lazy “Shop Girl in Green,” by Williams, starts with unison trombone and sax, segueing into a sleepy bass solo from Giron; and LeMasson’s “Sides” is bluesy, ominous and a bit crawly. Trombone and sax tiptoe around the blues beat, piano roiling below.

Gamlen wails on her pretty, moody “Zebra Drive,” and “Airport Tango” trots out some cool drums from Giron while the ladies interweave nice melodic lines on their instruments. It’s nice to hear Williams play the trombone again.

There’s ensemble improv work on “Two Views/No Secrets,” where Giron gets a bass solo, and Williams doop-dee-wee-woes some scat. The album ends with Gamlen’s “For Nothing Else,” with lyrics from a Robert Creeley poem. Williams sounds younger, her voice vibrant. She doesn’t sing much on this mostly instrumental effort and her vocal interludes set off the compilation nicely.

One recognizes the intimate friendships here, showcased by the effortless communication each player brings to the music. On the liner notes, Williams speaks of “indescribable synaptic magic that can occur between lovers of music everywhere.” There’ll definitely be some neurons firing when you listen to this CD.

And that ain't all at a time when the Republican party is struggling with its identity:

Plaintiffs in the case Donaldson and Guggenheim v. State of Montana are Mary Anne Guggenheim and Jan Donaldson of Helena, Stacey Haugland and Mary Leslie of Bozeman, Mike Long and Rich Parker of Bozeman, MJ Williams and Nancy Owens of Basin, Rick Wagner and Gary Stallings of Butte, Denise Boettcher and Kellie Gibson of Laurel, and Casey Charles and David Wilson of Missoula.

From the Bozeman Chronicle:

Bozeman Mayor Jeff Krauss wants his city to set an example for other cities across Montana by being the first to pass a resolution supporting the seven same-sex couples suing the state for the same rights as married couples.

"These couples are really walking out on a limb to put their faces forward, to put their stories forward, and I think they deserve the support," Krauss told the Chronicle.

Krauss is a Republican.

As MJ told us over cocktails last night, "It's time to butch up!"

Email ThisBlogThis!Share to TwitterShare to FacebookShare to Pinterest
piled in basin, montana politics